Thesis in a nutshell

Beni Stabili (“BNS”) is a high quality owner of office buildings in Italy. I think the current setup is excellent and provides substantial upside:

Beni Stabili (“BNS”) is a high quality owner of office buildings in Milan. It is the Italian subsidiary of Foncière des Regions (“FdR”), a French REIT.

FDR, which has a market cap of €5.3 billion (and trades ~14% above BV, 5.5% div yield, 85% payout ratio), is a high quality REIT that is 28% owned by Italy’s second richest man, Leonardo del Vecchio, the founder of Luxottica (US listed, market cap $23.3 billion). Del Vecchio controls 61.5% of Luxottica through his holding company Delfin.

Despite this, Leonardo del Vecchio keeps buying more BNS shares in the open market, both through FDR and directly through his holding company. The most recent sale by del Vecchio was around €0.76 back in Jul 2015 (corresponding to NAV at year-end), and since the spring he’s only been a buyer:

This page contains the raw filings (the raw Bloomberg data is wrong, however the chart above does show the buys in green and the only sale in red correctly): http://www.benistabili.it/Corporate.aspx?prd=1731&lng=1

To get a sense of what del Vecchio is trying to accomplish with FDR and by extension at BNS, I recommend the following:

Both FDR and BNS have accessible IR teams that speak English, and conduct conference calls in English.

On slide 23 of BNS’s 2015 year-end presentation, BNS notes that the estimated exit value of Symbiosis, its class A Milan office development,  is €500m. The book value of Symbiosis is ~€170m (p. 353 of BNS’s 2015 AR and confirmed with IR). The accretion is equivalent to €330m or €0.13 per share, assuming this is financed entirely with retained earnings.

The combination of higher than expected rents and a declining share price probably explains why del Vecchio has been buying BNS stock consistently over the past few months.

Symbiosis is but one of the five identified development assets, €170m of book value out of a total of €300m. I don’t know the potential upside of the remaining development assets, but clearly they could have a material value, perhaps as much as another €0.08-€0.17 per share.

Clearly this is very back of the envelope, but it provides some sense of magnitude. Prime rents may be lower than €240/sqm in some locations and the group share is 80% for some of the remaining assets and 100% for others, but on average it’s about 90%.

My 6% yield assumption is buttressed by the current gross yield on market values. BNS gets yearly appraisals on its assets and values the TI assets at a 6.3% yield, and the other office assets at 4.5% (slide 17 of Q1 results). I think 6% will prove to be conservative. I show a column with the resulting values at a 4.5% yield for illustrative purposes.

A note on NAV: BNS reports several layers of net asset value, ranging from €0.76 to €0.82 per share (2015 year-end results, slide 38). Real NAV is probably closer to €0.82 than €0.76, because the lower number includes the convertible bond option and mark-to-market on derivatives and borrowings. Historically, BNS has chosen to settle its converts in cash, and has avoided convertible dilution. I expect it to continue to do so.

You get paid a dividend of €0.024 (5% yield) covered nearly 2x while you wait. The dividend is paid annually in May. The IRR here is pretty attractive on a multi-year timeframe.

One big caveat: the total accretion will be lower than the numbers above because it is likely that debt may be incurred to finance these developments and capex. Yet even if we cut the accretion in half, our target NAV is still €0.92-€1.11. Clearly, the stock is cheap.

I believe BNS owns high quality assets. What’s the evidence? The behavior of these assets in terms of rents and occupancy during the GFC and a period in which Italy’s GDP has gone nowhere. Here are some historical numbers from the 2013 year-end presentation:

Why this is cheap

I believe this is cheap primarily because there is little analyst coverage, it’s effectively a small cap with little float, and because of headline risk in Italy this year. None of this impacts the intrinsic value of this business.

Italian banks are all over the news, with hundreds of billions of euros of non-performing loans on their balance sheets. Italy’s largest banks’ shares are down substantially this year, with Intesa Sanpaolo down 45%, Unicredit SPA down 64% and Mediobanca down 47%.

With the recent lessons of the GFC, I don’t believe central bankers will allow this problem to fester much longer. The ECB’s president, Mario Draghi, is providing ample monetary stimulus to the eurozone and has pledged to do “whatever it takes” (famously, in 2012):

Italian politics are also grabbing the headlines. Matteo Renzi, Italy’s premier, will call for a vote in October to substantially change parliamentary rules. He’s staked his future on it; if he loses the vote, he’s out. See https://www.theguardian.com/world/2016/jun/20/italian-pm-renzi-electoral-reform-m5s

While this will generate a lot of noise, I don’t believe it will pose a long-term threat to BNS. Even if Renzi loses, it’s unlikely we’ll see an “Italeave” scenario. See: http://www.bloomberg.com/news/articles/2016-07-04/a-prime-minister-a-referendum-and-italy-s-turn-to-get-worried

BNS relies on Telecom Italia (“TI”) for 52% of its rental income. Recently, these rents were renegotiated and the lease maturities substantially improved, from ~6 years to ~15. Telecom Italia is a well capitalized national champion with a new CEO, Cattaneo, installed by large shareholder Vivendi (controlled by French billionaire Vincent Bollore). Cattaneo has been talking about reducing TI’s real estate costs, and clarified his comments in a recent conference call by noting that this is more capex than opex driven. This makes sense, since the lease renegotiations with BNS included a commitment by BNS to spend €38m over 3-5 years to improve some of the core TI assets.

Despite this, I’ve heard some Italian analysts speculating that TI may want to renegotiate leases again. I think this is misinformed; BNS signed a binding framework with TI upon the lease renegotiation, the details of which are spelled out on pages 71-72 of BNS’s 2015 AR: 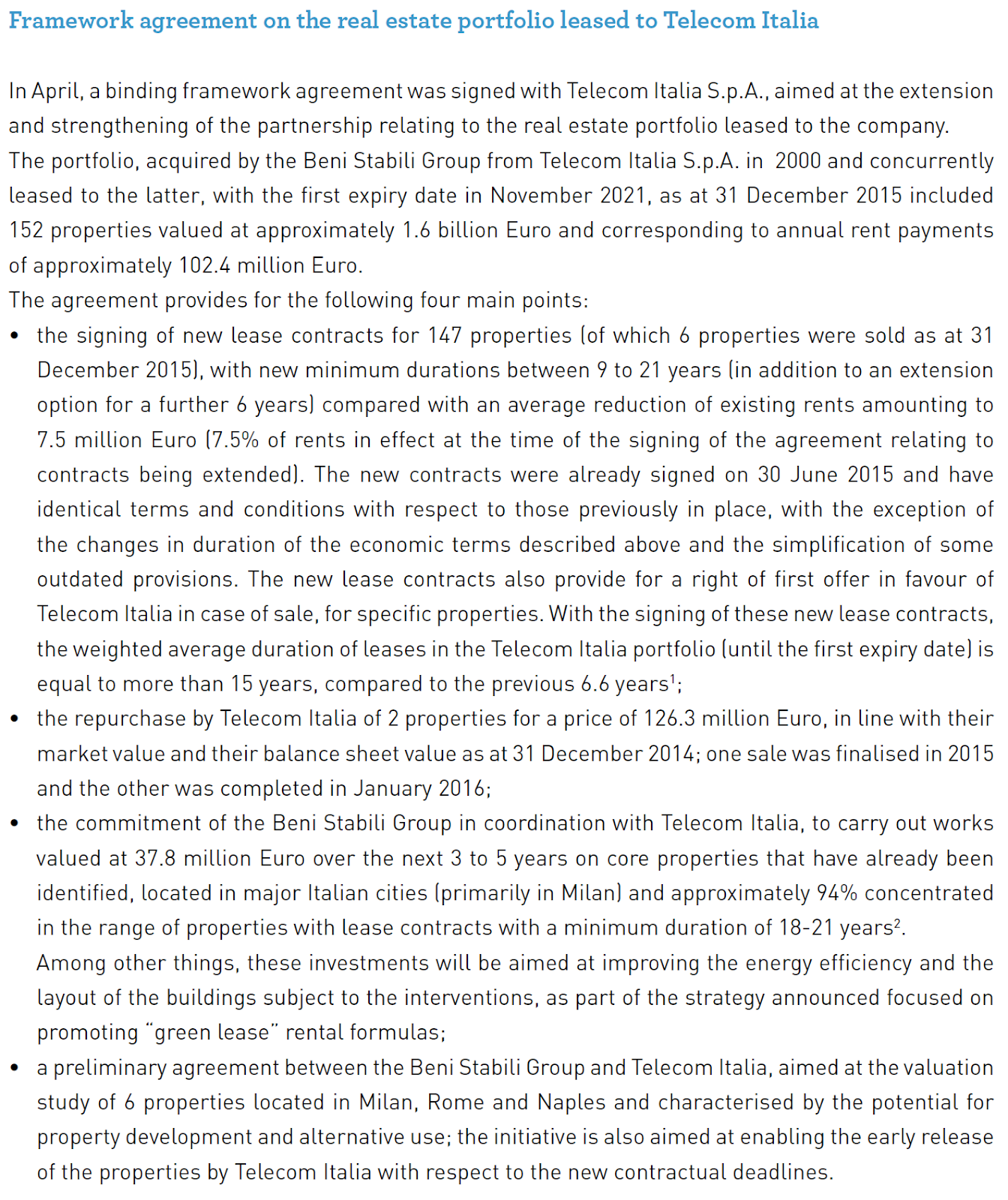 In line with the ECB’s activism, Draghi has recently been purchasing corporate debt in Europe. This has driven the cost of debt even lower. Indeed, Draghi has even made purchases of Telecom Italia bonds: http://www.bloomberg.com/news/articles/2016-06-08/draghi-seen-buying-junk-debt-shows-ecb-will-do-whatever-it-takes

Finally, recent news that open ended UK real estate funds have suspended redemptions has put pressure on listed real estate shares both in the UK and in the continent. This is not germane to BNS and the selling pressure probably stems from asset managers having to reduce exposure or reduce portfolio weightings.

What could really hurt this investment? An “Italeave” event and a return to the Italian Lira. Cap rates would blow out, the currency would devalue dramatically, and the shares would dive.