YETI is an outdoor lifestyle company that primarily sells premium coolers and drinkware. I suspect most VIC members are familiar with the company, so readers new to the story should view the presentation and 10K for additional details.

YETI IPO’d this past October after a failed attempt at going public in 2016. YETI priced at $18 per share, down from the initial range of $19-21. The offering was downsized 20% to 16mm shares, with insiders selling approximately 90% of the shares.

Investors were naturally skeptical. YETI looked like another one-trick consumer product pony, similar to GPRO and FIT, and the offering quickly broke the deal price. Short sellers were circling. Red Own Research issued a solid write-up last November and the stock sank to $12 around Christmas. A solid Q4 report flipped sentiment and YETI has been a rocket ship since, rallying 200% to $36/share.

I believe YETI is a timely short and I think the risk reward is skewed lower.

Bulls believe that YETI is an under-appreciated brand capable of driving sustainable sales and profit growth through continued innovation, new product introductions, and improved marketing performance. Bulls believe YETI can expand beyond their core South/Southwest market and  benefit from the strong secular tailwinds of premiumization and environmentally friendly products. YETI also has an attractive asset light model with healthy margins and high returns on capital.

Management guided to a long term growth algorithm (3+ years) of 10-15% sales growth with moderate margin expansion. Bulls likely think margin targets are conservative and will surprise to the upside. Margin targets are well below levels achieved in 2015-2016 and the company has strong growth in the attractive DTC channel. Assuming the high-end of management's ranges for both sales and margins, YETI should generate $250-275mm of EBITDA in 2022 and $1.75-$2.00/share of EPS, which makes YETI’s 35x NTM EPS multiple palatable.

YETI re-stimulated growth in 2018 via a handful of one-time growth drivers. Nearly all of the company’s growth is from the drinkware segment where YETI has a first mover advantage in the explosive growth of colored and customized tumblers, the next iteration of the stainless tumbler boom. In coolers, Yeti added wheels to its most popular hard cooler and aggressively expanded its soft cooler category. Dick’s Sporting Goods significantly increased YETI floorspace in 2018, driving 25% of revenue growth of 21.8% and 75% of YETI’s wholesale segment growth of 10.5%. Dick’s to the rescue!

As YETI laps these 2018 drivers, future growth will be challenged and the company will struggle to hit its long term targets. I think YETI is already near peak earnings of ~$1-1.25/share and when growth stalls out, as it did in 2016/2017, YETI will re-rate to a low double digit earnings multiple and fall below $15.

YETI cancelled their 2016 IPO when the parabolic stainless steel tumbler boom turned into a bust. Drinkware sales doubled in 2016, but then declined 31% in 2017 as customers became saturated with products that last a lifetime and competitors introduced nearly identical products for half the price. The Vista Outdoors CFO commented in Nov17 that the “stainless steel bubble” had “cooled off” and the bubble was “largely behind us.” 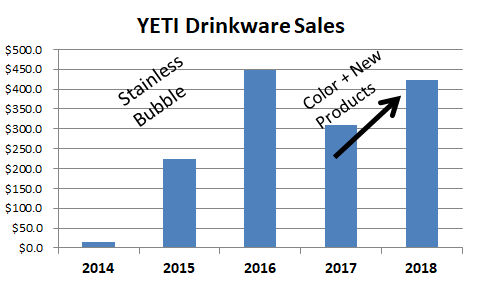 YETI pivoted in 2017 and started rolling out new products. They improved the tumbler tops, added handles, and released new wine and coffee tumblers. The biggest change was adding color to their standard tumbler. Stainless was out and color was in. YETI made custom orders easy and corporate business surged.

YETI created the tumbler bubble 2.0 with colors, but like with stainless, competitors have quickly caught up. RTIC has colored tumblers at a 60% discount to YETI and my personal favorite, the Ozark Trail tumbler, is available at Walmart for an everyday low price of $6.74 vs. $29.99 for a YETI. This isn’t a cheap knock off either. Ozark Trail makes great tumblers that are nearly identical to YETI. A quick search on Amazon shows healthy competition: search “Yeti tumbler” and a sponsored post for the BEAST tumbler pops up. There are many other products with great reviews at prices well below YETI. Amazon represents ~10% of total company sales. YETI also faces competition from other premium brands, such as Swell and Hydro Flask, which have a slightly different takes on vacuum insulated stainless bottles and these brands already dominate east and west coast markets.

Ironically, YETI might be its own worst enemy. In Texas and Florida I see many YETI fanatics with multiple mugs and coolers and I suspect customers are becoming saturated with colored product that lasts forever. The novelty of colored tumblers will soon fade. Part of what prompted this write-up was the observation that nearly everyone around town now seems to have a colored rambler - only a few of which are YETIs.

For 2019, YETI has rolled out new colors but the big drinkware “innovation” is a 24oz beer mug with a handle that can be customized with your name or fraternity letters. Elsewhere, new YETI innovation is uninspiring - premium priced tote bags, backpacks, dog bowls and blankets. In my view, YETI has taken their colors, handles, and improved top “innovation” about as far as they can and sales could collapse as YETI products are indestructible and last a lifetime.

YETI added additional colors and limited edition products to its coolers in 2018. They also expanded their soft cooler line with some new Hoppers. The largest driver of cooler growth was likely YETI’s new Tundra Haul, YETI’s most popular cooler on wheels. As a cooler reviewer notes, this was a no-brainer: “This is one of those things that are supposed to be so obvious they leave you wondering why they didn’t come much sooner.”

Despite the new colors and new products, cooler sales only grew 6% in 2018 after an 11% decline in 2017. Like ramblers, YETI coolers are designed to last a lifetime. Unlike ramblers, enthusiasts are less likely to continue buying for cooler “collections.” Competitors have quickly caught up with similar YETI look-alike products at lower price points. Going forward, YETI has limited options for cooler innovation to drive sales. 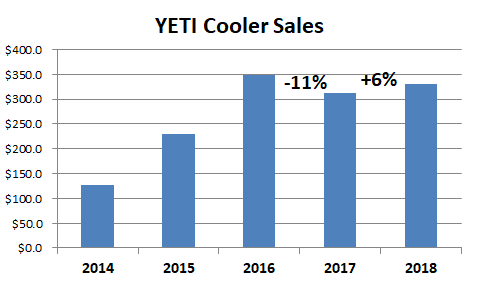 Anyone who has visited a Dick’s in the past six months has noticed an impressive display of YETI products.  YETI became a focus brand in 2018 and Dick’s allocated a healthy amount of store space. Dick’s recent public comments regarding YETI suggest they are all-in and future growth may prove challenging.

GS conference (9/6/18): “you'll see things we're doing with Yeti, which is really an extremely hot brand right now. And you walk into our store and the presentation we have with YETI is better than any other retailer in the country today.”

3Q18 earnings (11/28/18): “the new YETI display that we've incorporated in many of our stores for the holiday season, which is a powerful presentation of that brand.”  “YETI is still doing very well for us. They've got some new innovation out there. Hydro Flask is doing very well.” “...YETI, yes, this is something we plan to continue into next year. So, we bought it that way. We think our team, our merchandising team, store team, visual team, that's all worked together have put together we think probably the best YETI display in the country. And we're very pleased with that”

4Q18 Earnings (3/12/19): “We’re pretty pleased with where we are with YETI. It’s been a great brand for us. And if you take a look at that slide that we put out there, I’m not sure what else we could do. That’s a pretty impressive presentation of YETI. I don’t think anybody else has got that kind of presentation.”  “I mean we had a very good YETI fourth quarter.” 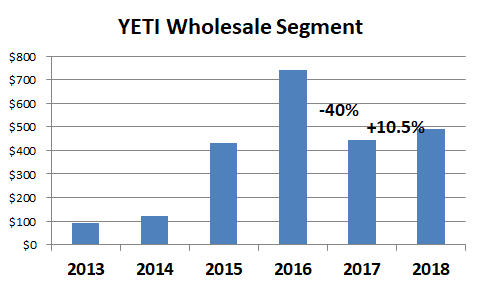 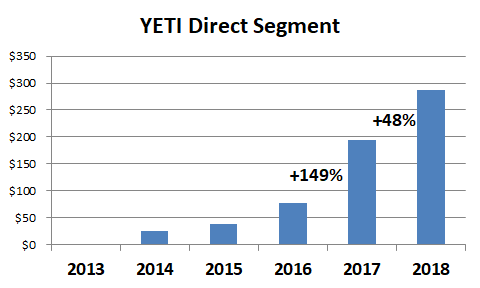 The company’s lockup expired on 4/23/19 and insiders are likely eager sellers. Cortec still owns ~53% and the founding Seider brothers own ~20%.  The company has been active in 2019 with non-deal roadshows and the sell-side continues to raise their price targets in hopes of participating in the secondary. This has helped push the stock to levels even the sell-side did not envision: 8 buys, 1 hold, and ~$32 average target. Only two analysts have targets above the current price. A secondary offering should improve borrow availability and rates shortly.

Looking at the balance sheet, YETI has a manageable $250mm of net debt ($328mm of debt and $80mm of cash). This is just 2x LTM EBITDA and the company continues to pay down debt with FCF.

YETI has guided to 11.5-13% sales growth in 2019 and 10-15% adjusted EPS growth. Sales growth is expected to be balanced evenly between coolers and drinkware, and the direct channel is expected to continue to outperform wholesale by growing mid-twenties vs. wholesale in mid-single digits.

I am skeptical of guidance. I believe this precise, full-year visibility is extremely limited in February, especially when YETI has seasonal sales and growth will be driven by new products/innovation with uncertain receptions. I don’t know how coolers will grow double digits when they only grew 6% in 2018 after declining 11% in 2017. I also don’t know how the wholesale channel will comp +5% in 2019 after only growing 10% in 2018 (after a -40% decline in 2017) as they lap the aggressive expansion effort from Dick’s. YETI will get a wholesale channel benefit through 1H19, but comps get significantly harder in 2H19. Last, I believe drinkware growth will be challenged in 2019 for reasons outlined earlier.

Despite my skepticism of 2019 guidance and long term growth, the company has lowered the bar significantly for 1Q19 and likely beat its estimates this Thursday (5/2 premarket). Management talked down 1Q19 as result of a 300bps Amazon headwind (accounting change) and consensus estimates call for just 6.5% revenue growth, the slowest for YETI in six quarters. With ~9mm shares short (~60% of the float) and a double digit cost to borrow, I’d use any rally to enter/add to a short position because a secondary offering is likely coming shortly.

YETI is a solid brand, but is a niche consumer products company that will likely follow the boom/bust cycles of other similar companies. YETI was able to re-stimulate growth in 2018, but this has come from unsustainable growth drivers and is unlikely to repeat. YETI has a lofty valuation (35x earnings) and insiders are likely eager sellers at this level. YETI’s future growth will be challenged and the company will struggle to hit long term targets. YETI should trade back to <$15 when growth stalls out again, as it did in 2016/2017, and YETI will re- rate to a low double digit earnings multiple on what is likely peak earnings of $1-$1.25/share.

Are you sure you want to close this position YETI HOLDINGS INC?

Are you sure you want to Flag this idea YETI HOLDINGS INC for removal?