Teekay Offshore (TOO) provides services to the offshore oil industry including shuttle tankers, FPSOs, FSO, UMS, towage vehicles and conventional tankers. TOO had been distressed in 2015-17 as a result of a levered balance sheet with upcoming maturities, significant capital commitments, and an unsustainable dividend.

In June 2017, the company reached an agreement with Brookfield Business Partners for a rescue package comprised of a share issuance at $2.50 and a warrant package (vesting if share price >$4).  This rescue package allows TOO to fund its capex program, refinance near-term debt obligations and invest in new assets. Furthermore, Brookfield noted at the 2017 investor day (emphasis mine):

To be clear, this is a very well-managed business at the operating level.  It has limited directcommodity exposure and its customers have very competitive operating costs which should support continuing production, even in a lower oil price environment.  When we did our diligence on this company, that was an area we spent a lot of time and energy thinking through. Teekay (offshore), as well, I really wouldn’t characterize as a turnaround.  It just had a broken balance sheet, but it’s fundamentally a sound business.”

As a result of this rescue, TOO had to slash its dividend to 1c which could have caused forced selling from its legacy income owners.  In 2018, the company's growth capex should begin to bear fruit, increasing DCF.  Even at 10x DCF, far below historical and peer valuations, the company should be worth ~$6 while downside is protected at $2 per share which is an attractive risk-reward.  Furthermore, Brookfield's involvement should assist with financing and capital allocation and it is highly likely that the company will restart the a significant dividend in the mid-term which should drive demand from income seeking investors.

In late 2017/early 2018, TOO's 5 major growth projects came online.  These projects include the Randgrid FSO with Statoil in Norway, the 50% interest in the Libra FPSO in offshore Brazil, 3 shuttle tankers for Eastern Canada, 4 ALP towage newbuilds and the Petrojarl 1 upgrade.  Other than the ALP newbuildings, these new assets have long-term contracts which should provide stable cash flows for several years. 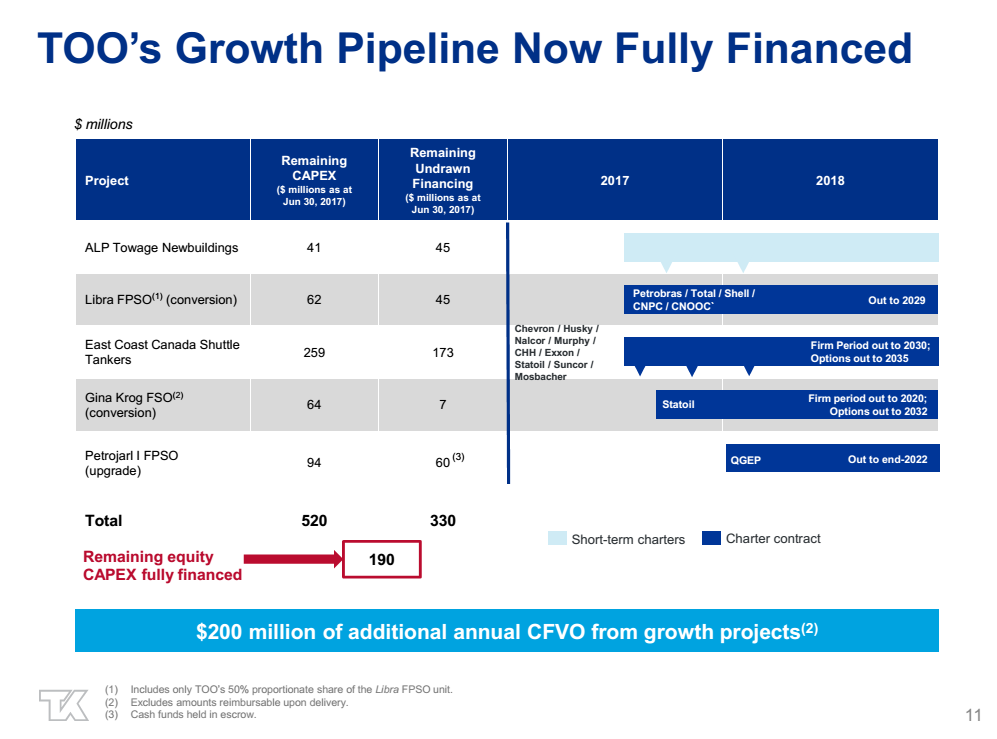 As these growth projects come online, EBITDA is expected to increase 200mln, almost 35% from FY 16 levels.  This increased EBITDA should help the company generate over $0.60 per share of DCF in FY 19 (see bridge below for a ROUGH estimate).  This DCF has room to increase further from other newbuild projects (already announced post Brookfield, asset re-contracting for some of their FPSO (Varg, Rio) and UMS (Arendahl Spirit) assets, selling non-core, money-losing assets, and interest savings as the company's balance sheet continues to delever.  In Q3 14, before the energy bust, TOO traded at 18x DCF.  However, merely using a 10x multiple would suggest upside above $6.  Eventually TOO should restart the dividend as a significant portion of DCF and then the company will start trading off a dividend yield again which could provide further upside.

A big risk to TOO is the re-contracting of their Voyageur and Piranema FPSO which could come off contract in 2019.  If  we assume that both do not recontract, then TOO could lose 90mln of CFVO.  This loss combined with other moving parts could lead TOO to generate 20c of DCF in a horrible scenario (see bridge below for a ROUGH estimate).  At 10x DCF, that would be ~$2 per share.

Another way to think about this is that Q4 17 DCF is expected to be $0.25 per share annualized before the contribution from a large portion of the growth projects. $2 would be 8x run rate DCF. 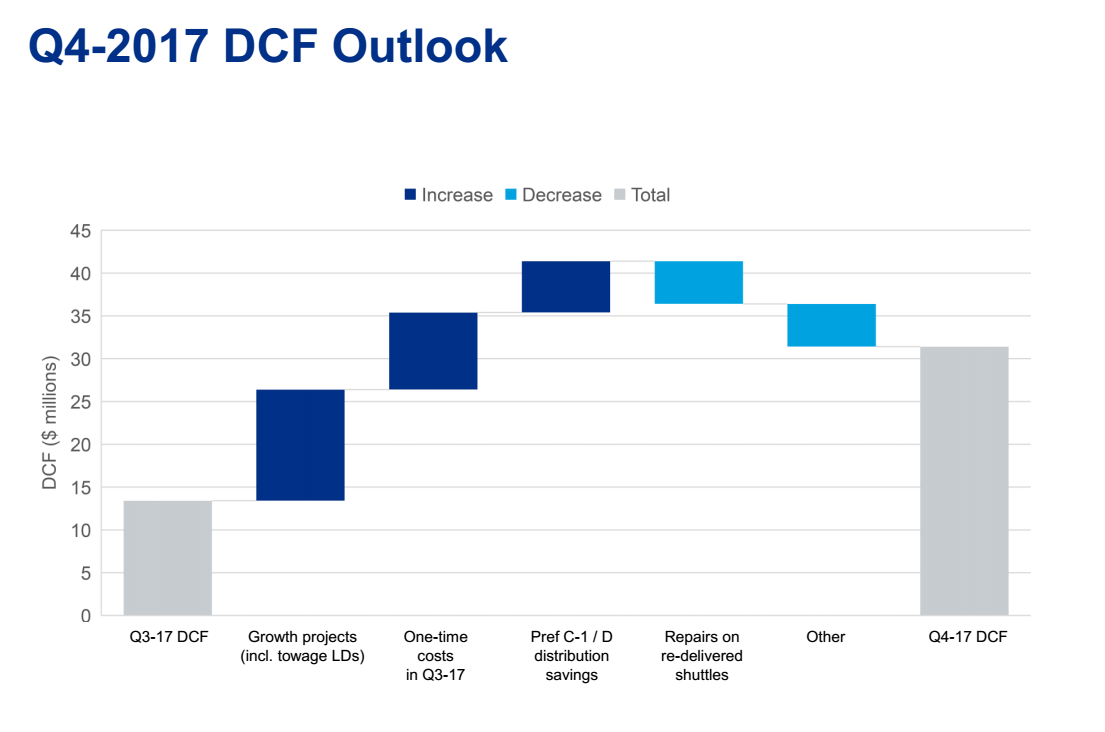 $2 is also similar to what Brookfield paid (after adjusting for the value of the warrants) and Brookfield was a highly, knowledgeable party with non-public information in a distressed rescue transaction.  Book value is ~2.40 per share and Wells Fargo estimates TOO's NAV at ~$3 per share.

Are you sure you want to close this position Teekay Offshore?

Are you sure you want to Flag this idea Teekay Offshore for removal?