I recommend a long position in Time Warner. Under the terms of its cash/stock merger with AT&T, shareholders will receive roughly $107.80 per share (based on AT&T's current share price). This represents a highly attractive 12% absolute return and, assuming a year-end close, a 14% annualized return.  In addition, TWX shareholders will also receive 3 to 4 dividend distributions of $0.405 between now and deal closing, an additional 1.8% yield.

Based on its relative valuation (in line with peers), TWX appears to be largely discounting a failed transaction, suggesting minimal downside risk in the unlikely event of deal breakage.  I view TWX shares as a highly attractive alternative to holding cash in the current environment.

The current spread implied by AT&T’s share price is roughly 12% on an absolute basis and 14% annualized, assuming a 12.31.17 closing.  This is the highest upside potential of any M&A transaction of size greater than $15 billion, excepting Monsanto/Bayer.

We believe there are three principal reasons for the wide spread

1)    The uncertainty created by the administration’s (i.e. President Trump) unusually outspoken stance against the deal.

2)    The large size of the deal (i.e. not enough event driven capital to close the spread in and of itself)

I believe the deal is highly likely to close.  For AT&T, the deal represents a vertical integration that likely improves upon standalone AT&T’s long-term growth rate.  AT&T’s wireless growth rate has been showing signs of deterioration for some time and the DirecTV business is clearly maturing. TWX is unlikely to break the deal unless superior alternatives exist.

The FCC is not expected to have to approve of any license transfers.  Regulatory approval appears to rest in the hands of the DOJ. While President Trump has been a vocal critic of the deal and CNN, in particular, there is little that the President can do to block the deal.  To the extent Justice follows his lead, AT&T maybe required to sell or spin-off CNN.  From a strict antitrust perspective a vertical integration of entertainment and distribution does not appear to have any meaningful hurdles to overcome and does not appear to lessen competition in any way.  Comcast NBC was the last vertical integration in the media and communications industry.

Time Warner Stock has Performed in line with Peers

It is worth pointing out that TWX share price has only performed in-line with peers since deal announcement.  Looking back to the undisturbed share price of 10.14.17, TWX has actually modestly  underperformed FOXA and CBS shares (see Table below).  Disney shares are up slightly less – 20.6%.  A big reason for the group’s performance has to do with the relatively high tax rates of the entertainment companies – i.e. 30%+ - and the prospects for tax relief.  The AT&T-TWX transaction was announced prior to the election which has turned out to be fortuitous timing for AT&T shareholders. 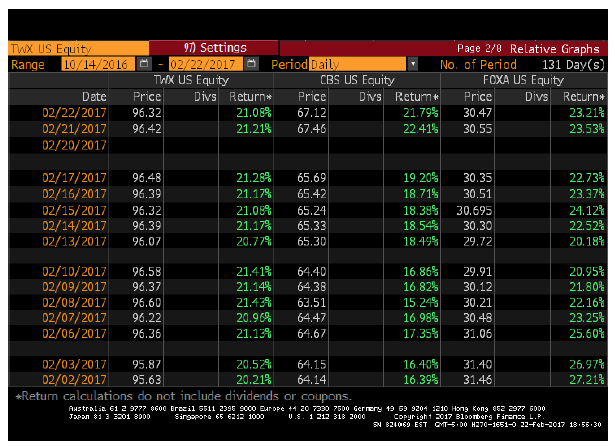 Moreover, TWX’s valuation is almost exactly in line with its peers – CBS, DIS and FOX.  This suggests limited downside risk associated with a failed merger with AT&T.

Are you sure you want to close this position TIME WARNER INC?

Are you sure you want to Flag this idea TIME WARNER INC for removal?