Recommendation: Long Spirit AeroSystems ("SPR") equity at $45. I think SPR shares have 40% upside to my one-year forward target price of $64.

Background: beep899 provided a nice overview of the business and outlined the reasons the 737 MAX would fly again. In an April 2020 write-up, buggs1815 addressed why the 737 MAX would be recertified by the FAA why commercial air traffic will recover 2019 levels and beyond. buggs1815 got you a 142% return from his write-up. Rather than rehash the business description I will address the three summary points above and explain why I think SPR has at least another 40% to go.

China 737 MAX recertification: As simply as possible, China will recertify the MAX because it has no other choice. As Cowen has pointed out, if Chinese air traffic recovers to high single digit growth, China will require 275-300 new narrowbody aircraft per year. Earlier this summer the FT estimated China will need to grow its narrowbody fleet to almost 7000 by 2030 from a little over 3000 at the end of 2019. Assuming annual retirements of 2.5% of the fleet, China needs 435 narrowbody deliveries on average per year through 2030. Airbus's narrowbody deliveries into China were <125 in 2019, and COMAC (China's state-sponsored aircraft manufacturer) can't fill the gap. 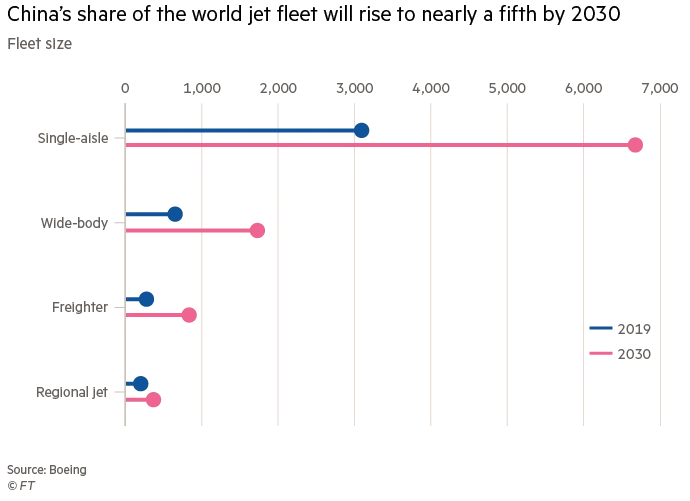 COMAC started developing its flagship single-aisle airliner, the C919, in 2008, with the intention of competing with the 737NG and A320ceo. The C919's first test flight was almost a decade later in 2017 and COMAC is only now securing its first firm orders from Chinese airlines. Now that the 737 MAX and A320neos are in service, the C919 is a generation behind, and cannot compete with Boeing and Airbus on fuel efficiency (which improved 15-20% with the MAX and neos), weight, and thus range, and seating capacity (see table).

Beyond the C919's technical inferiority, the C919 is unlikely to gain certification from the FAA or EASA anytime soon and is thus suited only for domestic traffic. China will likely grant type certification for the C919 by the end of this year (see recent Reuters piece here) but that will come with significant limits on its operations until COMAC makes further upgrades. Once certified, COMAC won't reach its annual target of 150 planes for years. Also of note, China isn't yet self-sufficient in the most complex parts of the aerospace supply chain, including the LEAP-1C engine, and is highly reliant on western manufacturing (see graphic below from the FT article linked above). That leaves the C919 susceptible to geopolitical risk should the US and other western countries need to pressure China on other fronts. In February 2020 the Trump administration considered banning the export of the LEAP-1C, and in January 2021 the administration added COMAC to its list of companies that contribute to the advancement of technology for China's military, along with AVIC, COMAC's former parent. 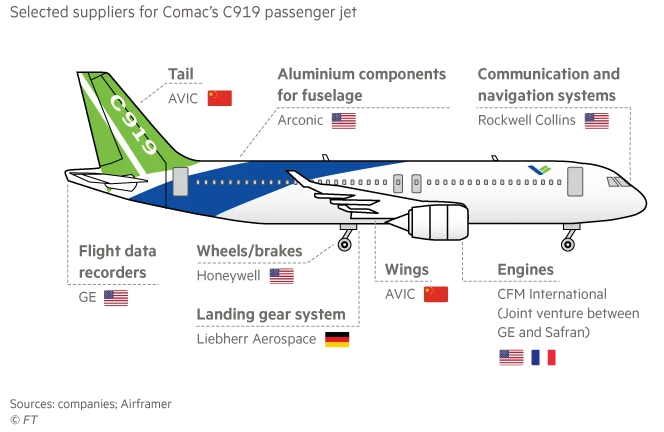 It may take China's aviation industry decades to prove it can provide adequate customer support and reliability. In the meantime, China needs Boeing if it wants to avoid sole dependence on Airbus and the C919.

Increasing narrowbody share: The depth and duration of the passenger traffic downturn caused by COVID-19 is greater than in any prior downcycle, and will likely drive structural changes in commercial aerospace, including the acceleration of fleet rationalization, a shift towards narrowbody aircraft, and the permanent removal of older quad-engine widebodies from service. For years pre-pandemic, aircraft demand exceeded supply, leading to record backlogs for Boeing and Airbus. The current downcycle allows airlines to rationalize their future fleet plans and remove older uneconomic aircraft from current fleets. ESG concerns are a major motivator here, especially in Europe, as older aircraft are significantly less fuel efficient than newer models. Post-covid, the vast majority of the passenger fleet will consist of the A220, A320neo, A350, 737 MAX, 777X, and 787: aircraft on which SPR has significant content.

Covid will likely accelerate a shift towards narrowbody aircraft that was already under way. With improved engines and aerodynamics, the A320neo and 737 MAX can serve longer routes that traditionally would have required the use of a widebody. The A321XLR, expected in service in 2023, has range of 4,700 nm and could comfortably reach Hawaii, Buenos Aires, and Istanbul from JFK.

Finally, the A340, A380, and 747 will likely have limited to non-existent roles in future passenger fleets due to the ongoing shift to point-to-point flying and away from the traditional hub and spoke models. Some A340s and 747s will be converted to freighters, but those are unlikely to occur in any significant volume as the 777F will remain the preferred workhorse of the long-haul freight market. Quad-engine aircraft had become increasingly uncompetitive even pre-covid due to their high operating and maintenance costs (especially for the engines) and advancements in propulsion technology that have allowed for more economical twin-engine aircraft (such as the A350 and 777) to serve the same routes. As has been seen in past downturns, current high parked fleet rates will likely lead to elevated retirements.

Spirit generated 68-70% of its revenue on narrowbody platforms pre-covid. I estimate that will rise to 82% by 2024 driven by a return to full 737 MAX production (which SPR can achieve with minimal incremental capex) and continued growth of the popular A220 platform, on which I estimate SPR has ~$6.3mm of content per plane.

SPR's forward loss positions on the 787 and A350 have attracted a lot of negative commentary in recent quarters. SPR expects the 787 will be free cash flow positive beginning with line unit 1405, which the company expects to deliver in 2025. However, the two programs should account for just 11% of revenue by 2023, compared to 21% pre-pandemic, and gains from the ramp of the A220 should more than offset remaining FCF burn.

Underappreciated margin and FCF tailwinds: Unit costs in commercial aerospace tend to follow well-defined learning curves as first quantified by Theodore Paul Wright in 1936. Wright found that every time total aircraft production doubled, the required labor time for new aircraft fell by 20%. This has become known as Wright's Law. NASA estimates learning rates in commercial aerospace have averaged 85%, i.e., a 15% unit cost reduction for each doubling in cumulative production. SPR increased aggregate EBITDA margins by ~120 basis points from 2015-2018 as compared to 2013-2014 as 787 and A350 deliveries ramped and as the company saw robust 737 MAX production (learning gains were lower on the 737 MAX as it shared a fuselage with earlier 737s, but not insignificant at high rates of production). Overall, based on a detailed platform by platform build, I estimate SPR achieved 2.4% to 3.3% annual unit cost reductions on a weighted average basis from 2013-2020. I expect this effect to be 50-150 bps worse from 2022-2025 as the 787 is running at significantly lower production rates and because other platforms have matured and are farther down the curve. But the ramp in 737 MAX production coupled with above average learning curves in the A220 and A350 platforms will stem the losses from the slow rates on the 787. The upshot is that underlying EBITDA margins can reach nearly 15% by 2025 (down from peak of 15.8% in 2016), implying $1.15bn of 2025 EBITDA. As SPR is through the heaviest part of the investment cycle to fully capacitize plants for the 737 MAX, A220, A350, and 787, incremental capital needs are lower than they have been in the last 10 years, and I see SPR generating $700mm of FCF ($6.50 per share) by 2025.

Valuation: SPR was an investment grade issuer pre-covid; thus, 25-50 bps of improved funding costs from today's levels doesn't seem like too outlandish an assumption. Because I don't expect SPR to recover its full earnings power until 2025, I value the company using a DCF assuming limited growth after 2030 and a reversion in returns on incremental capital to WACC over the next ~40 years. My $64 target one year forward would be 11.5x 2023E and 8.0x 2024E EBITDA, which compares to current 2022E aerospace supplier multiples of anywhere from 8-11x (ATI and TGI) to 12-17x (HWM and HXL). $64 also implies a >10% FCF yield assuming $6.50/share in 2025, which compares favorably to high single digit 2023E FCF yields on comps not afflicted by the idiosyncratic issues that have hit SPR. 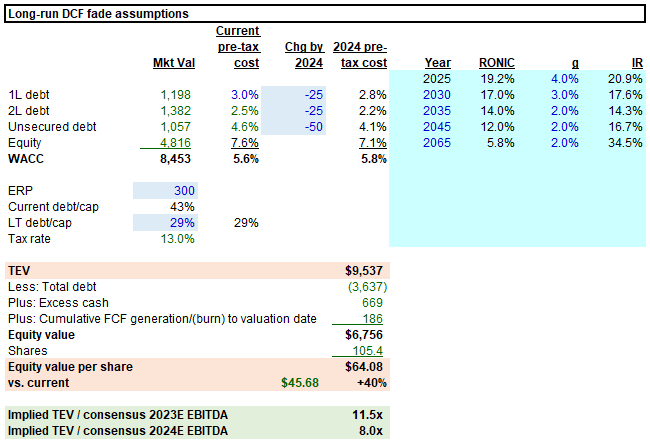 Risks and downside: If China does not recertify the MAX and/or if global passenger air traffic and commercial aerospace demand recovers on a much weaker trajectory than my forecast, I have SPR hitting just $800mm of EBITDA and $3.60 of FCF per share by 2025. With the same cost of capital as above, I get to a share price of $37 a year forward, down 18% from today's close. 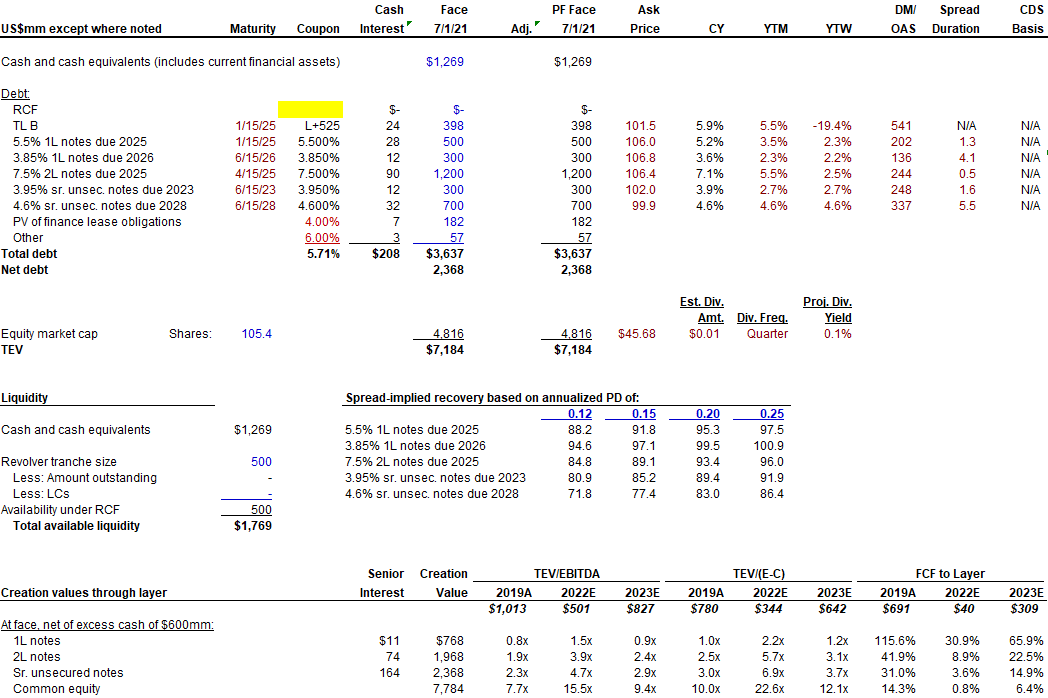 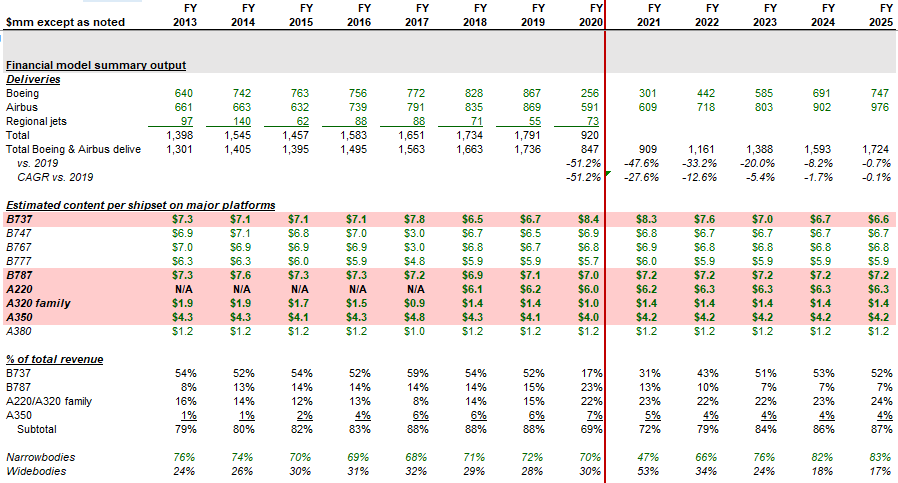 * Recovery in 737 MAX delivery cadence. SPR's MAX deliveries rose in the last three quarters and should continue to ramp in Q3/Q4 to reach the company's target of 160 shipsets. 737 MAX shipsets fell to 15-20 per quarter in Q1’20-Q4’20; pre-covid and pre-MAX grounding, overall 737 shipsets (including NGs) were ~160 per quarter, or 53 per month. Boeing plans to produce 31/month early in 2022 and consensus estimates are for Boeing to return to a 44-46/month run-rate by 2022. SPR plans to lag BA rates by ~5/month through the end of 2022 while BA works through excess inventory.

* Recovery in 787 delivery cadence/resolution of rework. SPR completed 30-40% of the rework required on four issues discovered in Q1, and it has started on the subcontractor work identified in Q2. Management said the rework essentially involves replacing a part, with Boeing and the FAA to decide on the final fix. SPR has already defined the scope of the fix and has already completed the first few units

Are you sure you want to close this position SPIRIT AEROSYSTEMS HOLDINGS?

Are you sure you want to Flag this idea SPIRIT AEROSYSTEMS HOLDINGS for removal?