Sparton is a gem of a business buried beneath the wreckage of a bungled rollup strategy, with some good catalysts in place to surface the value.  A lot has happened since zzz007 wrote this up last October, and I think the idea is timely and deserving of another close look.  I'll do my best to add some fresh insight.

Sparton’s 2Q16 call on February 3rd was basically the last-straw for some very disgruntled shareholders (well worth a read/listen btw).  Whereas a flurry of recent acquisitions should have produced strong earnings growth, the contract manufacturing segment EBIT went negative, and today Sparton appears to be on the verge of breaching its debt covenants.  (I’m not worried, FYI.  This should easily be waived for a fee if it happens.)

In a nutshell, I think some or all of the MDS segment is on the block.  And it’s entirely possible the whole company gets sold.  And I’m not sure it’ll take a fight.  I actually think the Board is a shareholder friendly one.  Why?  Because four out of the six remaining Board members (Cary was the 7th) are basically there from the last time an activist showed up at Sparton’s door – notably Andrew Shapiro of Lawndale Capital.  The Chairman and now-interim CEO is one of those four, and I don’t believe he has any intention of entrenching himself in that position.

But hey – I could always be wrong.  And if I am wrong, we have the activists to hold the Board’s feet to the fire.  Sparton’s charter/code/articles are very activist-friendly: the Board has been de-staggered, everyone’s on a one year term, and 6 out of 7 are independent.  Again, we have Mr. Shapiro to thank.

Let’s take a look at the main attraction here – namely, the Sonobuoy business:

Sonobuoy = SONAR + buoy.  This is the main tool in the Anti-Submarine Warfare (ASW) toolkit.  Looks like an oversized mailing tube. When the Navy suspects the presence of an enemy sub, they send a plane loaded with something like 40 to 80 of these things.  The plane drops them into the water where the sonobuoys open up like upside-down umbrellas and use SONAR for 30 minutes to ~8 hours to listen for the sub, all the while relaying data to the crew on the plane.  Then they self-destruct.  At a couple $K a pop, this adds up to significant revenue for Sparton.

Sparton builds these as part of a 50/50 JV called ERAPSCO, along with UK-based Ultra Electronics.  For all intents and purposes, ERAPSCO is the sole-source supplier to the US Navy and lots of friendly nations around the world.  As zzz007 explained so well, it would be really tough for anyone else to break into this lucrative niche.  Sparton has been supplying these things to the Navy since 1951, and has basically been the world’s leader in sonobuoy technology since 1963.  When ERAPSCO bid on a 5-year contract with the Navy in 2014, nobody else even showed up.

Sales collapsed following the end of the Cold War, but lately they’ve been going back up: 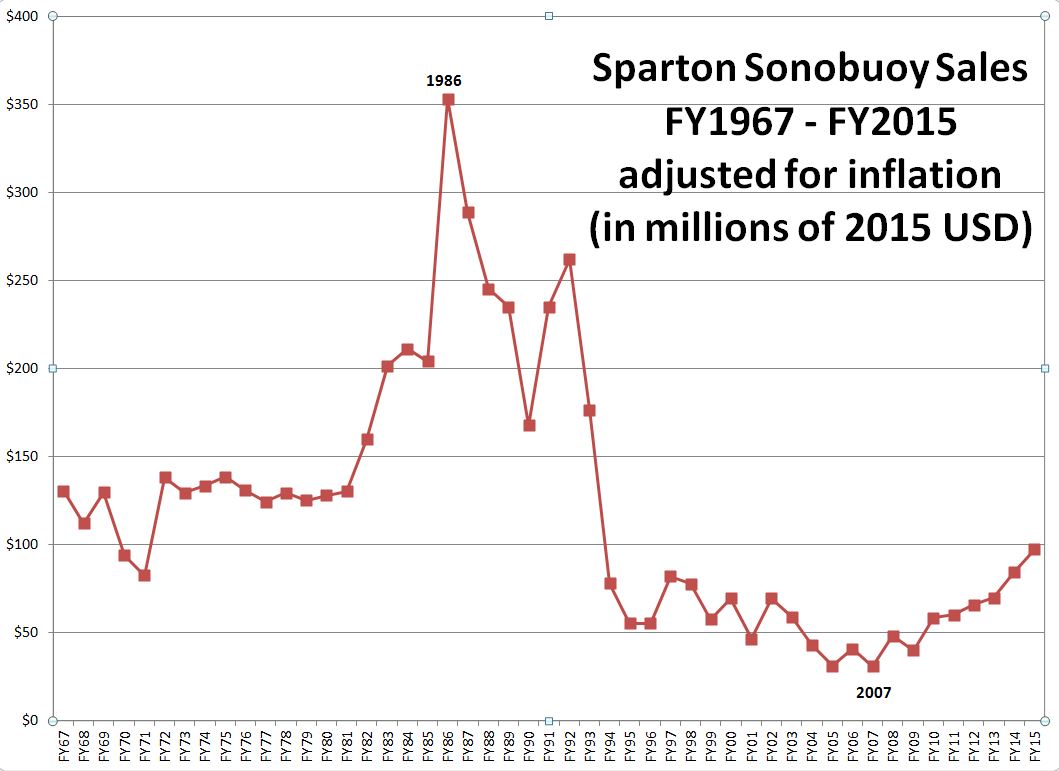 Obviously, the main driver here is China’s growing military presence in the Pacific.  Less obviously, Russian submarine sorties are up by ~50% over the last couple years.  North Korea also has subs … not very good ones, but let’s not take any chances.

Additionally, the Navy is in the process of replacing its fleet of P-3 aircraft with P-8s.  The P-8 is a modified Boeing 737 that carries up to 120 sonobuoys per sortie vs 80 for the P-3.  As the fleet transitions, it’s likely that the old P-3s get sold to our various allied nations, creating additional sonobuoy demand.  And foreign sales carry higher margins

While he was on his shopping spree, Cary also did 5 acquisitions for Sparton’s ECP segment – the one that includes sonobuoys business.  Total cost: $36.1M.  These are the “other sales” in the table below.  Stuff like ruggedized displays for military/industrial use.  Companies that have intellectual property – generally speaking, higher quality businesses than you’ll find in the MDS segment.

Now let’s look at the troubled part – the contract manufacturing business (aka MDS):

Sparton was on its deathbed back in 2008/2009 when Lawndale took control and stalled Cary Wood as CEO.  Cary was a veteran of auto-industry turnarounds and he quickly turned Sparton around as well.  He’s a good operator and upgraded performance standards all over the company – notably improving production quality of the sonobuoy business.

But his capital allocation did him in.

Sparton got into the business of making printed circuit boards (for civilian as well as military use) back in the 1970s – and in those days it was actually a good business.  Times changed, of course, and in 2006 the company bought a contract manufacturing company that made medical devices – the idea being that making stuff for highly regulated industries, and industries where you couldn’t send production offshore, would allow for better margins.  Think of companies like IEC and LaBarge (before it was acquired by Duocommun).

Cary built on this idea, scooping up 9 companies – some of which make medical devices, while others make assorted higher-end industrial stuff.  He spent $157M in total, not including fees for the deals that didn’t go through.  To put it in perspective, that’s over half the current EV, or ~$15.80 per share - kind of a lot for a rollup whose EBITDA just went negative last quarter.

In his defense, I don’t think the troubles arose from any poor quality work on Sparton’s part.  Quality went up under Cary’s tenure.  Rather, the troubles were simply the things that make contract manufacturing tough – products get discontinued, products get delayed, customers find themselves with spare capacity and production back in-house, and so on.  MDS just couldn’t replace the lost sales fast enough.  To his credit, Cary held the line on margins.  But when seven years have gone by and you’re still not over 60% utilization, something’s got to give.

I think about this in terms of “how much are we paying for the good business” under various scenarios for the bad one.  I figure MDS probably gets sold for something like 25-75% of what Cary paid for it – mostly within the last 3 years.  To be conservative, I’ll ignore the $32.7M cost of the 2006 acquisition (Astro Instrumentation),  as it lost some key customers back around FY11 and I’m not sure it every really recovered.

So the question becomes, what multiple of ECP earnings do these proforma EVs represent?  Earlier we saw that ECP did $32.3M in EBITA for the 12 months ended in December.  But we need to make two adjustments to that (which coincidentally happen to just about offset each other).

First, note that Sparton’s intersegment sales are basically all comprised of circuit cards made at their Brooksville, FL facility for their Sonobuoys (made in DeLeon Springs, FL).  Brooksville is part of MDS – it’s the “original MDS” … i.e. the crappy circuit card business.  These sales totaled $21.8M in the LTM.  The MDS segment bills the ECP segment for this work at about the same margin earned by ECP, which is 29%.  If MDS were sold, there’s just no way Sparton would need to pay another company a 29% gross margin for circuit cards.  If you take out the sonobuoy sales, Brooksville does about an 8% margin.  The difference should accrue to ECP.

Second, we need to figure out how much of corporate overhead belongs to ECP.  Let’s suppose it too gets sold to a strategic buyer (probably not whoever takes MDS, as these are very different businesses).  Ultra Electronics seems a likely candidate, and they just happen to have a right of first refusal.

Unallocated overhead is currently about $17M/year, which is a fairly bloated number.  Since Cary started, MDS and ECP have been “compartmentalized” – each run with their own overheads, aside from the cost of being public.  Some folks I talk to think MDS was always intended to be sold.  In any case, this structure certainly would facilitate that.

There are probably some costs of the M&A program in there as well – for the deals that didn’t get done.  And there’s at least $2M of public company costs.  In all, I think the overhead can be pared back to $12.7M.  Conservatively, I’d say at least 70% of that belongs to MDS.  Not only does MDS have 70% of the combined sales, but it also has a much higher number of customers to attract and retain.  ECP, on the other hand, does 2/3 of its sales with the US Navy – a customer they’ve had for ~35 years.  You probably don’t need a huge salesforce for that business.

Now look again at where sonobuoy sales used to be. Look again at how little capex this business needs. That's why I'd love to pay any of the above multiples for it.

Final thoughts:  there’s a chance MDS results could show some improvement in 2H16 (June).  Cary recently hired a lot of new sales people and takes a little while for them to start producing.  He recently moved to consolidate a couple facilities, and the savings should be realized in a few months.  Working capital has been elevated due to the recent Hunter acquisition, but some of this should turn into cash in 2H.  Lastly, the medical device tax just got suspended in December, and I think OEMs might have held off on production in anticipation of this during the past quarter.

Are you sure you want to close this position SPARTON CORP?

Are you sure you want to Flag this idea SPARTON CORP for removal?