I recommend buying shares of Megacable, Mexico’s 2nd largest cable company. For record-keeping purposes note that, as of 4/20/2017 (approximate date of this writeup), Megacable's stock price was 70.36 pesos, and the exchange rate was 18.8 pesos per dollar (meaning an effective USD price of $3.74).

Because of faster broadband speeds, cable is a superior product to copper wires/DSL.  As a result, cable companies tend to take market share from legacy telcos.  Megacable is no exception.  Over the past 5 years, Megacable has grown unique subscribers at an 11% CAGR, revenue generating units at a 15% CAGR, and EBITDA at a 14% CAGR (almost all organic).

Despite this track record of strong growth (and what I will argue below is a long runway for continued growth), Megacable trades at undemanding valuations on both relative and absolute bases (9.7x EV/LTM EBITDA and 17x LTM GAAP P/E.).  I’ll also add that, unlike many other cable companies, Megacable is underlevered (net debt makes up <5% of EV).

With the founding Bours family owning 65% of the Company, float is only 35%.  So while the market cap in USD is ~$3B, liquidity is lower than you’d think, which may be an issue for some funds/investors. 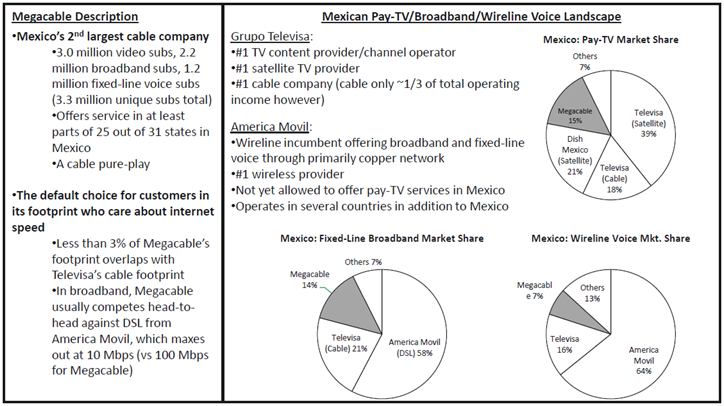 Megacable is a good business – Over the last five years, they’ve compounded RGUs, EBITDA and EPS at 14-15% CAGRs with hardly any contribution from acquisitions: 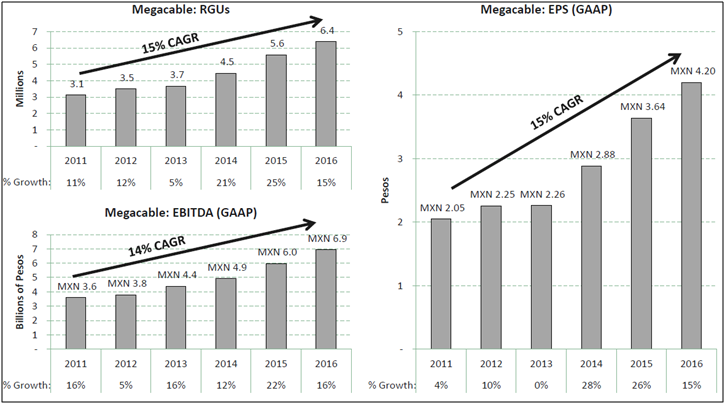 RGU = revenue generating unit; for example, a customer who subscribes to a “triple play” package including TV, internet and phone counts as 3 RGUs. 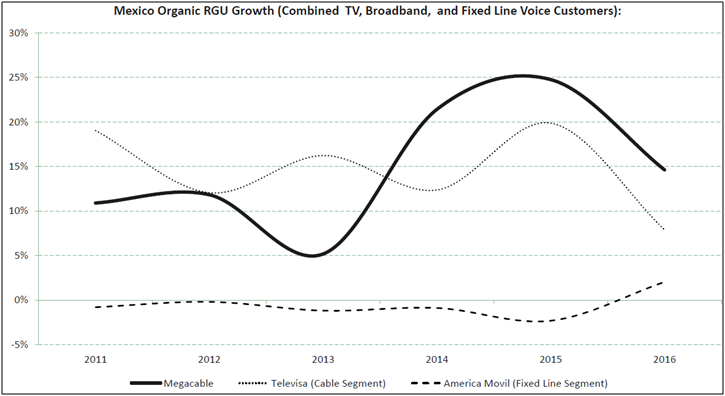 For Megacable, selling broadband is a better business than selling TV:

As high-speed internet increasingly becomes a “must have,” Megacable’s reliance on TV is decreasing and its business is improving:

Reason #1 why Megacable has a long growth runway: Many homes in Mexico still to be connected to cable 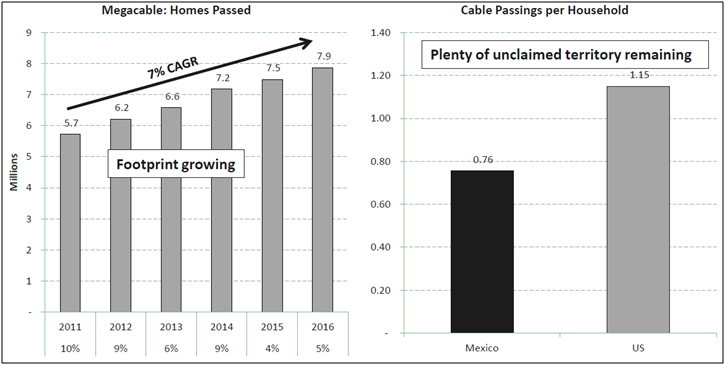 Reason #2 why Megacable has a long growth runway: Plenty of homes in its footprint have yet to switch to cable 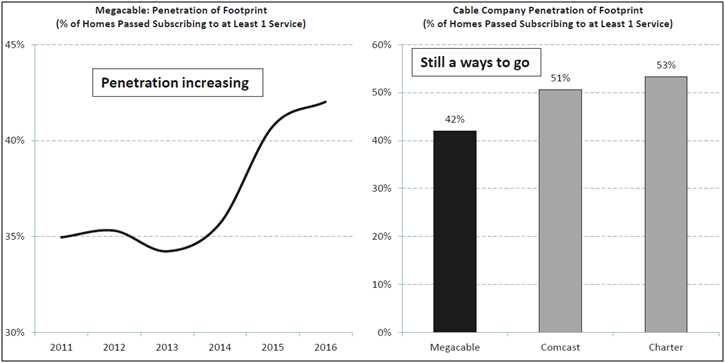 With the DSL incumbent still at >55% broadband market share in Mexico, there is lots of share left to take 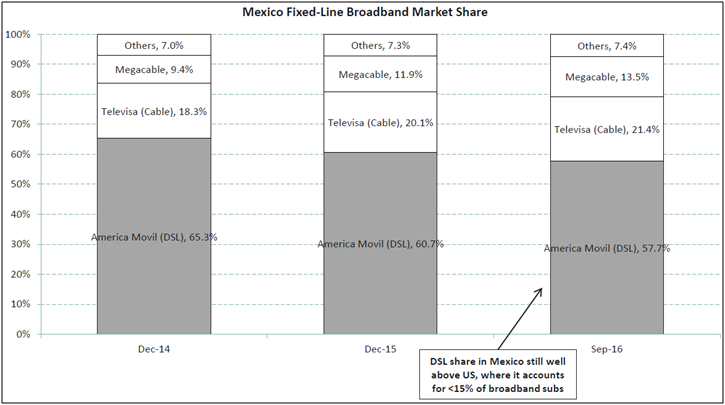 Megacable is one of the fastest growing publicly-traded cable companies in the world, but it does not trade at a premium to peers: 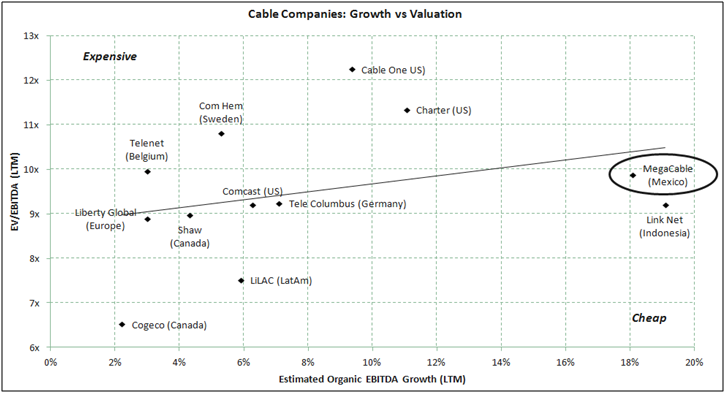 Figures above based on closing prices as of 4/19/17 and most recently reported LTM financials.  For Charter, Liberty Global, LiLAC, Com Hem and Tele Columbus, LTM EBITDA figures are PF for acquisitions.  All EBITDA figures include stock comp.

Unlike many cable companies, Megacable does not currently trade at the peak of its historical valuation range:

Currency is definitely a risk…

…But FWIW, the Peso appears to be ~15% undervalued relative to the dollar on a purchasing power parity basis, suggesting that the Peso may appreciate over the long term:

Another risk is that, because of elevated capex, Megacable’s FCF generation has significantly lagged earnings:

I’ve defined capex as the sum of “acquisition of properties, networks and equipment”, “acquisition of intangible assets” and “incurrence of capital leases”; note this definition of capex results in a higher figure than Megacable management quotes.

The history of US cable suggests that capex/sales for Megacable (ranging from 20-35% of sales in recent years) will eventually come down below 20%, boosting cash flow: 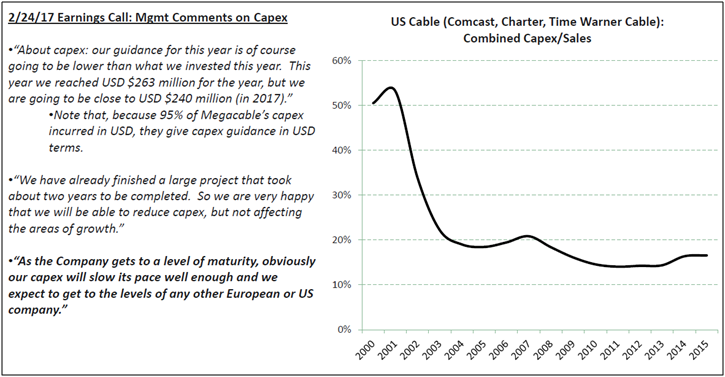 Data from US company 10-Ks, Megacable earnings call. Note that, for Comcast, I only included capex and sales figures for their cable segment instead of the entire company

Are you sure you want to close this position Megacable?

Are you sure you want to Flag this idea Megacable for removal?