Meta Financial (CASH) is an undervalued small-cap bank and we believe it is a long for the following reasons:

1.       Strong position as an issuer in pre-paid debit creates a valuable, growing, low-cost deposit base

2.       Crestmark Bancorp acquisition is highly complementary as it matches a high-return asset base with the low-cost deposit base

3.       Reduced competition from closest peer (The Bancorp) due to regulatory restrictions

4.       Management is good and incentivized

Meta has been written up several times on VIC previously so I would refer readers there for detailed discussions on the bank’s history, business descriptions, background and the growth potential of its payments segment: 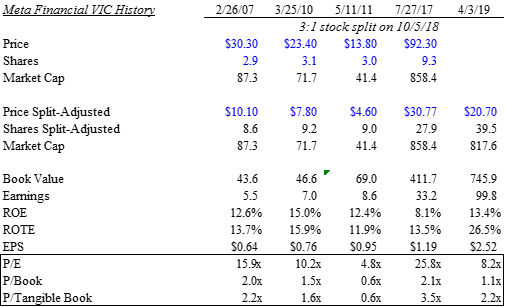 1.    Strong position as an issuer in pre-paid debit creates a valuable, growing, low-cost deposit base

As the issuing bank for a variety of payment solutions like prepaid / general reloadable debit cards for programs such as NetSpend, Meta has enjoyed a long history of growth of extremely low-cost and often non-interest bearing deposits.  This growth has remained ever during a period when the bank was under a cease-and-desist order from the OTS/OCC (more on this topic later) and was not able to sign new partners, so the growth rates were just organic growth of existing programs:

Having $2.7 billion in sticky-deposits that you pay zero interest on is an enormous advantage for a bank with $6 billion of total assets.  We believe this growth in low-cost deposits will continue for the foreseeable future.

2.    Crestmark Bancorp acquisition is highly complementary as it matches a high-return asset base with the low-cost deposit base

One of the criticisms of Meta over the years has been the inability to exploit their low-cost deposit base into high-return assets on the other side of their balance sheet.  For years, Meta invested in low-yield mortgage backed securities that earned paltry returns. For example, 5 years ago, of the $1.7 billion in total asset that Meta had, $700 million was mortgage-backed securities with an average yield of 1.70%.  This was a very inefficient use of capital, in our view. However, Meta recently acquired a bank called Crestmark that was in many ways a perfect complement to itself: a bank with a high-yielding asset base but an expensive funding base using expensive CD’s and brokered deposits, with zero non-interest bearing deposits.  While one could quibble about the price paid for Crestmark (which we will address briefly now and in the valuation section), the merger was highly complementary.

One could criticize Meta for paying 14x earnings and 3x book (though Meta claims they paid 7.2x 2019 earnings including synergies), we would note that Meta also paid using stock which was valued at 15x and 2.9x tangible book at the time.  We do not believe the Crestmark deal destroyed value as it was valuation neutral, but highly complementary from a strategic perspective. 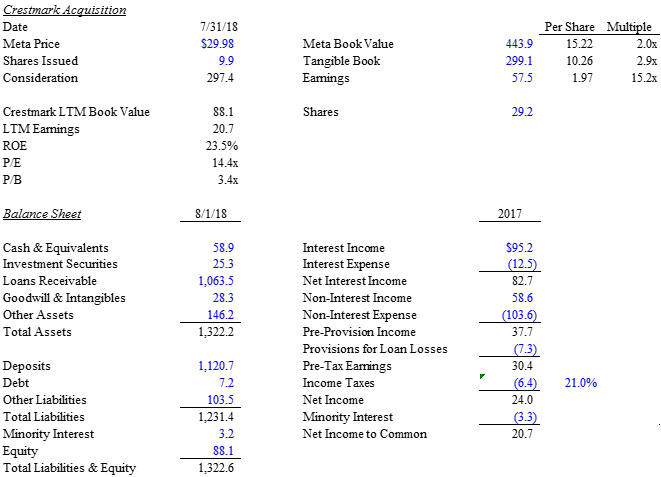 3.    Reduced competition from closest peer (The Bancorp) due to regulatory restrictions

As long-time readers and investors in Meta and TBBK remember, Meta itself was under a cease-and-desist order for many years (2011-2014) and was unable to sign new program partners in its payment segment.  One of the main competitors for Meta is a company called The Bancorp (which itself has been written up several times on VIC, in 2006, 2010, 2012 and 2014). In a twist of irony, TBBK is now the one under a cease-and-desist order from its regulators for a laundry list of violations: 2012 Federal Reserve (unsafe banking practices), 2014 FDIC (Bank Secrecy Act) and 2018 FDIC (unfair deceptive act under FTC).  We think these orders won’t be lifted soon and will provide a competitive tailwind for Meta.

4.    Management is good and incentivized

In October, the old CEO Tyler Haahr (who’s family founded the bank) stepped down and the head of Meta Payment Systems, Brad Hanson, became CEO.  Brad had effectively been running the bank for many years and we think most investors won’t miss Tyler or any of the other Haahr’s. We believe Brad is capable and talented (see prior write-ups for his background and discussion), young (54 years old), has been at Meta since 2004 and well-incentivized (he owns $8 million in stock compared to an $814k salary and $3 million total compensation).

Meta is an interesting animal in that it’s valuation has fluctuated from as low as 5x earnings / 0.6x book value after its cease-and-desist order was issued in 2011 to as high as 20x earnings only a year or two ago.  Over time, it has traded (fairly in our opinion) at a mid-teens P/E multiple, to reflect its rapid growth and low-cost deposit base. Currently, the bank trades at roughly 7.5x earnings and closer to 5x on what we think the bank can earn in a year or two based on the assumptions below: 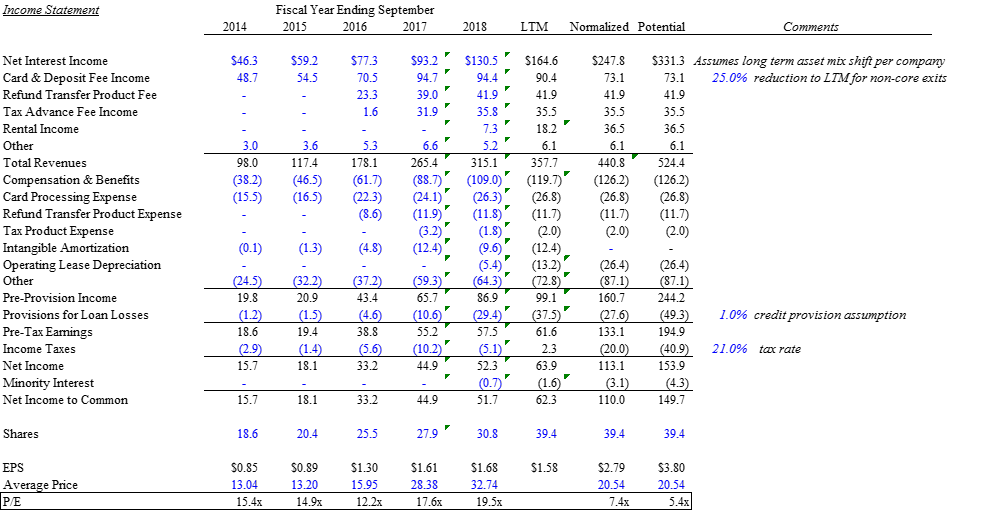 At a 10x earnings multiple on close to $4 in EPS, we think Meta is worth $40 per share, or a double from today’s price.

6.    Capital allocation is likely to be more attractive going forward:

One of our criticisms of Meta in the past was that capital allocation was not ideal (to say the least).  The bank regularly issued equity below book value, sometimes at the behest of regulators to build equity capital during its cease-and-desist and other times for no good reason.  However, there are reasons to think that capital allocation is likely to be much better going forward:

o   Durbin exempts banks with assets under $10 billion from the onerous debit interchange caps it set for larger banks.

o   With $6.2 billion in assets now, we think Meta explicitly does not want to double its assets again, at all, in order to remain under the $10 billion limit for Durbin

o   New CEO Brad Hanson appears much more shareholder friendly than the prior Haahr family CEO’s, so the focus is likely to be more on shifting the asset mix with the Crestmark acquisition, rather than growing the total asset base

o   The new shareholder friendly policies were displayed last week, when for the first time since  2003, the bank announced a share repurchase authorization:

For these reasons, we think that the per-share value of Meta is likely to compound at a far higher rate than it has in the past (which itself wasn’t too shabby).

Meta has always given investors a reason to hate its stock.  If you read through the comments on the prior 4 VIC write-ups, you’ll see why:  floods in Iowa, cease-and-desist orders, underperformance at the bank, the loss of a contract with H&R Block . . . yet over time, the growth of the low-cost deposit base does create value for investors.  Today, there are a few reasons why we think Meta is depressed:

a.       Inverted yield curve / recession fears / general bank underperformance:  we don’t have too much to add here . . . we don’t necessarily view an inverted yield curve as a remarkably accurate barometer, but it seems to be the great bogeyman for banks.  Maybe someone with a clearer crystal ball can elaborate for us. However, as a bank, general economic weakness is a risk.

a.    After acquiring Crestmark, Meta disclosed that Crestmark had invested in these mobile solar generation assets that turned out to be a Ponzi (what solar business isn’t a Ponzi scheme?).  DC Solar though, was a legit Ponzi: https://www.wsj.com/articles/solar-business-accused-in-810-million-ponzi-scheme-struggles-in-bankruptcy-11551385184

b.   The impact to Meta is a pre-tax $13.7 million asset write-off and a $7.9 million hit for previously recognized tax credits for a total value of $22 million (assuming no tax impact on the asset hit) or $0.55 per share

c.    Meta’s stock went down by something close to $170 million in market cap at a time when other financials/banks were doing fine, so we think that the impact of this news is more than priced in

Despite the above, we think that Meta will prove to be a satisfactory investment.

Are you sure you want to close this position META FINANCIAL GROUP INC?

Are you sure you want to Flag this idea META FINANCIAL GROUP INC for removal?