Aegis logistics is one of key beneficiaries of increasing LPG penetration in India – a key initiative by the government to promote clean fuel usage. The stock has underperformed last year along with the broader mid-cap market in India, while the larger gas distributors have had a great run of the back of number of government initiatives promoting natural gas and LPG fuel. The company is in the middle of massive capacity expansion and sorting out logistics issues, which will set it up for 20%+ volume growth for next few years. Management has historically scored very well in capital allocation and operational efficiencies, which affords comfort that the company will be able to increase utilization of new capacity at generate historical high returns on investments.

Company mainly deals with terminalling of LPG, oil products and chemical imports to the country. Business is divided into two segments, i) Gas (LPG), where it does sourcing, terminallng and distribution and generates about 75% of total EBITDA, and ii) Liquids.  The earnings contribution mix has changed over the last decade and has shifted towards Gas, where the opportunity size is much larger.

Current terminalling capacity is 5m mtpa and the segment is the cash cow of the company. The company had last added 2.5m mtpa capacity in Haldia in Dec 2018 (with HPCL as anchor customer with 20 year MOU).  Company is expanding its terminalling capacity by another 4m mtpa by adding a new facility in Kandla port (open contracting). Post the Kandla facility commencing in FY21, company will have total throughput capacity of 9.2mn mtpa (from its capacity of 0.75mt in FY16; 12x increase over span of 5 years).

Company is extremely efficient operator and has demonstrated ability to 80+ turns per year (90-120% utilisation), versus average of 25-30x for the industry, which affords it with extremely high ROIC on its investments. Historical investment has been about Rs 1000 per ton of capacity. On this, the company generates roughly about Rs 1000 per ton of revenue and EBITDA margins is high as 80-90% at maximum utilisation, which implies ROICs of over 75%.

Aegis provides LPG sourcing facility for domestic OMC customers. Company entered a JV (40% stake) in 2014 with Itochu of Japan to improve its LPG sourcing capabilities. On average, Aegis makes an EBITDA of US$4.00/mt from its sourcing business. EBITDA CAGR has been over 20% for last 4 years, and is expected to continue this momentum. Company does not take any commodity price risk in sourcing LPG.

Company has Liquid terminals in 5 ports (Mumbai, Pipavav, Kochi, Haldia and Mangalore). Current EBITDA contribution from this segment is about 25% of total EBITDA and has fallen sharply over the years due to the rapid growth of the Gas terminalling business. Current capacity is about 664k KL and is expected to increase to 811k KL over the next 12 months. ROIC for this segment is about 20-25%; capex required is about 100crs for 100k KL of capacity, which can generate about 30-35crs of revenue and about 20crs of EBITDA. 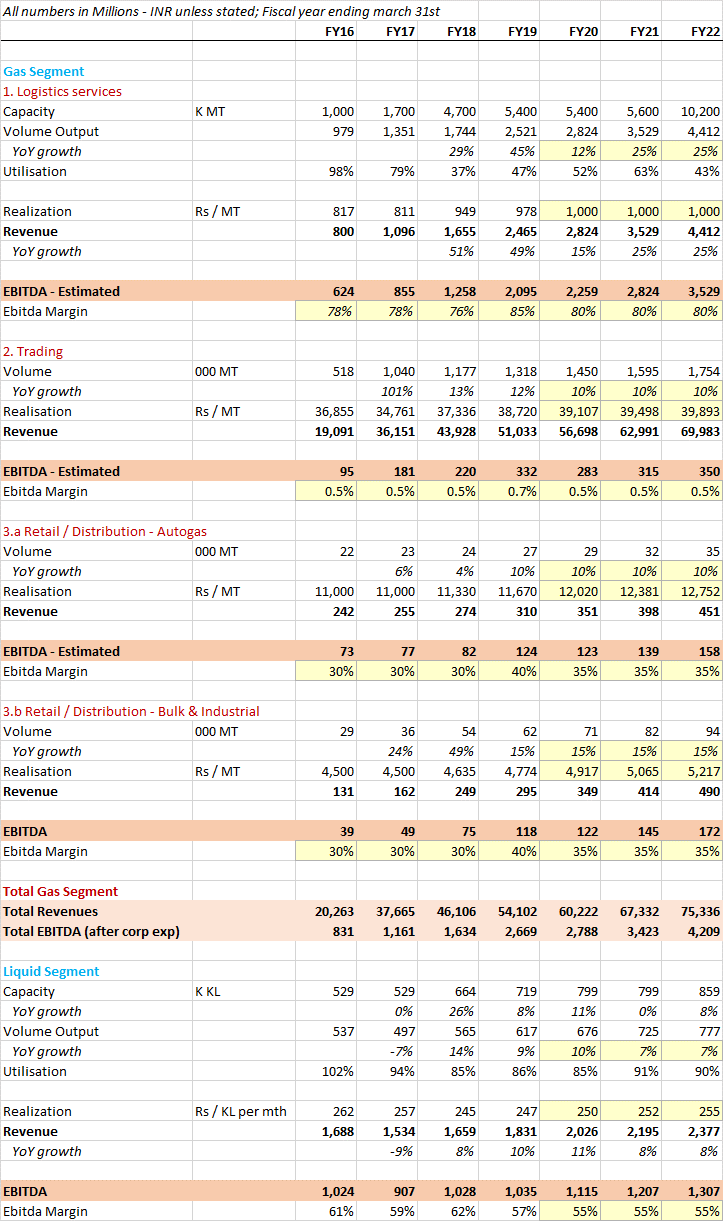 volume pick in gas and liquids; resolution of logistics issues at Mumbai and Pipavav

Are you sure you want to close this position Aegis Logistics Ltd?

Are you sure you want to Flag this idea Aegis Logistics Ltd for removal?