Arconic is a downstream metal company that split out of Alcoa in October of 2016. While the company’s legacy is Aluminum and this comprises the bulk of revenue, 60% of 2017 EBITDA comes from a segment, Engineered Products and Solutions (EPS), that is largely comprised of Titanium and Nickel (Aluminum is only 20% of revenue in this segment). These other metals are significantly higher margin than aluminum and are the gem businesses.

The EPS segment (45% of revenue) sells components to a number of end markets, though primarily its products end up in aircraft and aircraft engines (~75% of 2016 EPS revenue). The remainder is split between gas power plant turbines (10%), commercial transport (5%), and other businesses such as oil and gas, mining, automotive and so on (10%). The components this business provides to aircraft are cheap relative to the aircraft cost, but highly critical, comprising of fasteners designed to hold the aircraft together, metal components for the hot area of the engine and similar key parts. As a result, EBITDA margins are the highest of ARNC’s segments at 21% in 2016, though there is still a considerable gap (~900 bps on a comparable products basis) to main competitor Precision Castparts (PCP). This business stands to benefit significantly as next generation aircraft engine programs ramp (more content per engine vs. previous generations), and as Boeing and Airbus continue to ramp overall aircraft production rates.

Arconic’s second biggest segment, Global Rolled Products (GRP) sells rolled aluminum to end markets largely overlapping with the EPS business, though the split is significantly more fragmented. It accounts for 40% of revenue and 25% of EBITDA. A number of these businesses are high margin with good growth prospects. Their aerospace business (metal for fuselages and wings) is 19% of 2016 revenue and benefits as aircraft production ramps. 25% of this business is automotive, and is growing roughly 20% yearly as manufacturers switch steel out for aluminum to save weight and improve fuel economy. Another 7% is commercial transport which is largely aluminum for commercial trucking applications, this also stands to benefit as the truck cycle rebounds. The remainder of the business is less exciting. An industrial products business (21% of sales) with a number of miscellaneous businesses is forecast to grow at 1-2% a year. A low margin international aluminum Can business is growing slowly. And a US Can business (11% of 2016 sales) earns roughly 0% EBITDA margin and is being shut down (these Can plants can be relatively easily converted into automotive plants). This business underperforms peers on margin (12% EBITDA margin today) and utilization metrics and stands to benefit both as production ramps and as costs are taken out.

Arconic’s final segment (15% of revenue and EBITDA) is Transportation and Construction Solutions (TCS). This business is split roughly evenly between a commercial transportation business and a building and construction business, with a small LATAM extrusions business as well. The commercial transportation business is largely aluminum wheels for trucking which stands to grow as the trucking cycle rebounds and as existing trucks switch steel wheels out for aluminum to save weight. The building business provides aluminum paneling for high rises, and is generally a GDP grower with business across the world. While margins are hard to benchmark as there are no clear competitors to this business, this segment has the highest ROIC (17%) and thus seems to be well run. 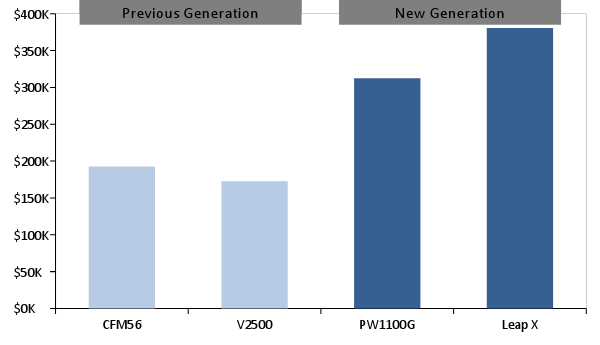 Source: Our math based on prior two charts

Other Arconic businesses are growing or at worst steady - Arconic’s automotive business (10% of 2016 revenue) is forecast to grow 16% in ‘18 based on multi-year contracts with the auto OEMS to supply aluminum used to lightweight vehicles (swapping out steel). The Commercial Transport business (10% of sales) is set to grow at a 9% CAGR from 2016 to 2019 as the truck cycle rebounds. The building and construction business (10% of sales) is a GDP grower. The international Can business (10% of revenue) is also a steady grower with multi-year contracts. The remaining “other” business (15% of sales) is harder to forecast but is made up of a diverse set of end markets (oil and gas, mining, off highway, etc) but is growing mid-single digits in 2017 to date and company forecasts low mid-single digit growth through 2019 in most of these businesses. Notably, this overview excludes their now small (1% of revenue in 2017, down from 5% in 2016) US Can business which is being shut down, and contributes essentially no EBITDA 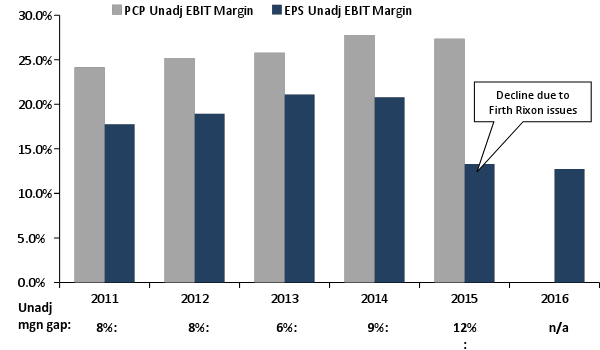 Reward case: In our reward case, our biggest difference to the street comes from the performances of both the EPS and GRP Segment (see exhibit 1 on next page). In EPS we assume 10% CAGR revenue growth (all numbers ’17-’19 unless stated otherwise), versus 6% for the street, and 500bps of EBITDA margin uplift versus 250bps for street (and 400bps for company goals). We believe the street fails to grasp the growth story and incremental margins provided by the ramp in aerospace revenue. The company has stated that their markets are growing at 7% CAGR over that period, and that they believe they should grow above that. Given what we know about their revenue per engine and aircraft, we are inclined to agree. Furthermore, the street appears to put little value on cost savings opportunities and the value of increased utilization of existing assets.

On GRP, again we are more optimistic than the street. While our growth CAGR is only slightly more optimistic (+100 bps), we are significantly more optimistic on the EBITDA margin side. The company gets 150bps of tailwind between 2016 and 2019 simply by shutting down its zero margin US Can business, yet over this same period the street estimates an improvement of only 60bps, implying it believes the margin picture on the other businesses is actually worsening. We believe it will get +200bps over that time period. The street case seems unlikely, as revenue growth is coming from GRP’s highest margin segments (automotive and aerospace). Further, the company’s utilization is low, and this growth will be largely off existing factories, and thus margin should rise a good deal, perhaps more than our estimates.

The returns in this case are quite promising. We should expect that a ~40% increase in EBITDA from 2017 to 2019, on levered stock ($10B of gross debt/pension versus $12B of market cap today) generates 72% upside in a two year period based on a flat EBITDA multiple. There is further upside if the company uses the excess cash it will have on hand in 2019 (will be able to return $3.0B through 2019 and still remain within leverage targets) for something accretive such as a share repurchase. Additional upside ($6) will result via tax law changes

Risk Case: In this case we assume the street is right. Perhaps this happens via the EPS ramp taking longer than expected due to operational issues. Perhaps this happens because the other businesses underperform despite a strong performance from aerospace. Either way the street still implies $500M of EBITDA growth from 2016 to 2019, and without multiple compression this means we should expect significant returns (stock up ~50%). However it seems likely that underperformance will be met with significant declines in multiple, and given leverage this impacts the business a good deal. Thus, with 5 turns of EBITDA multiple compression versus our base case, we forecast the stock to decline 27%. Admittedly, it is hard to pick the correct multiple for this case, and it is somewhat arbitrary, however we are comforted by how steep the multiple decline must be for this stock to go down meaningfully over a two year period.

Sum of the Parts: This is not one of our main scenarios, but we’ve performed this to validate our valuation. Based on our targets, there is 116% upside in two years year. Even if the company significantly underperforms our expectations and their targets, there is meaningful upside (up 18%) even one year out (for backup on these multiples see comparables section, our math is simply using average of competitor multiples)

Note – Street estimates hand calculated from analyst notes/models. Bloomberg consensus numbers are not correct/meaningful likely due to recency of spin 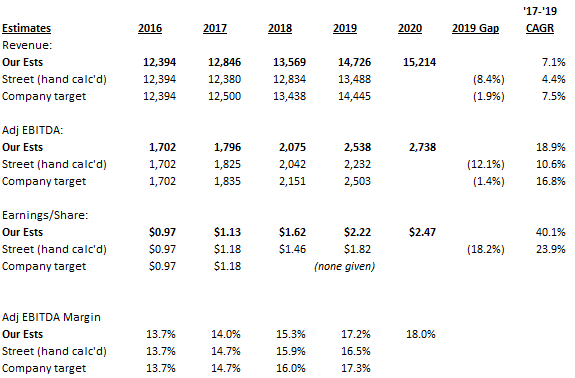 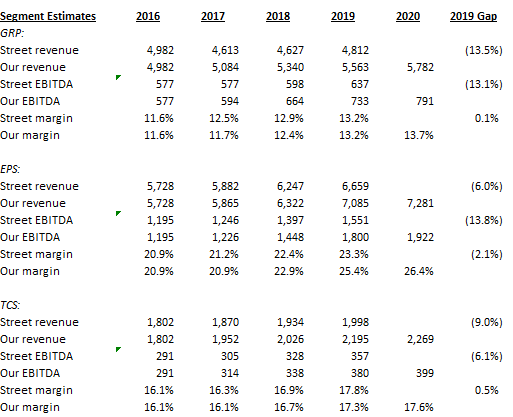 Comparables – Note that given the competitive dynamics of these businesses and the fact that many of the competitors are private (PCP, Novelis), few direct comps exist. PCP numbers shown are where stock was for most of 2015 prior to acquisition by Warren Buffett (deal was 12.4x EBITDA) 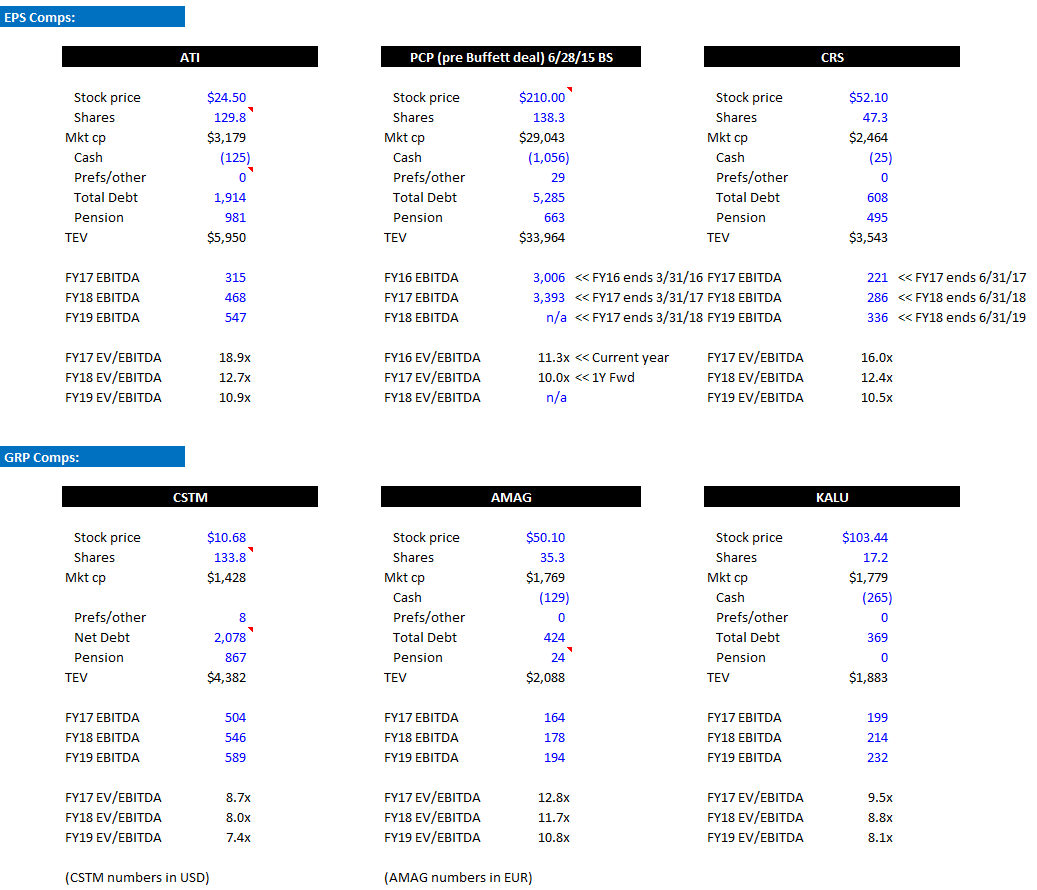 Are you sure you want to close this position ARCONIC INC?

Are you sure you want to Flag this idea ARCONIC INC for removal?