Ameris is a low quality community bank trading at a high multiple of earnings that are benefitting from unsustainable positives.  The stock price has increased based on the indiscriminate buying of ETFs.  A closer look at the finances will reveal that an outlay of $46 to purchase a share of ABCB will take a long time to recoup, and that this is not a bank to hold for the long term.  In contrast, high quality banks like WFC and USB trade at reasonable multiples of stable earnings.

Significant buying of ETFs.  Investors are ebullient about prospects for banks, particularly since the election results.  Higher economic growth, higher interest rates, higher inflation, lighter regulation, and lower taxes are among the many reasons for optimism.  Their optimism is reflected in an increase in the shares outstanding and net asset value of the SPDR S&P Regional Banking ETF.  Following the election, shares outstanding increased by as much as 30% and the net asset value by as much as 27%.  When investors buy an ETF, the ETF buys shares of its components without discriminating based on fundamentals of the various constituents.

New focus from non-specialists. Goldman Sachs reported that client attendance at the US Financial Services conference in early December had increased by approximately 25%.  Many generalists recall the fantastic investment returns that banks delivered owners during the 1990s.  Not every bank will benefit equally, however.  While new buying from non-specialists is not as indiscriminate as new buying by ETFs, there will be some nuances that non-specialists don’t have time to focus on in the near term. 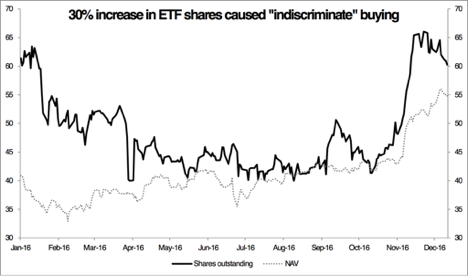 Huge losses in financial crisis.  The bank’s losses over eight quarters (4Q08-3Q10) during the global financial crisis summed to 47% ($64m/$135m) of beginning tangible common equity (3Q08). This bad outcome was the result of bad risk management and bad underwriting.  At the height of the real estate bubble in 3Q08, Ameris held loans for construction equal to nearly 270% of tangible common equity ($360m/135m). 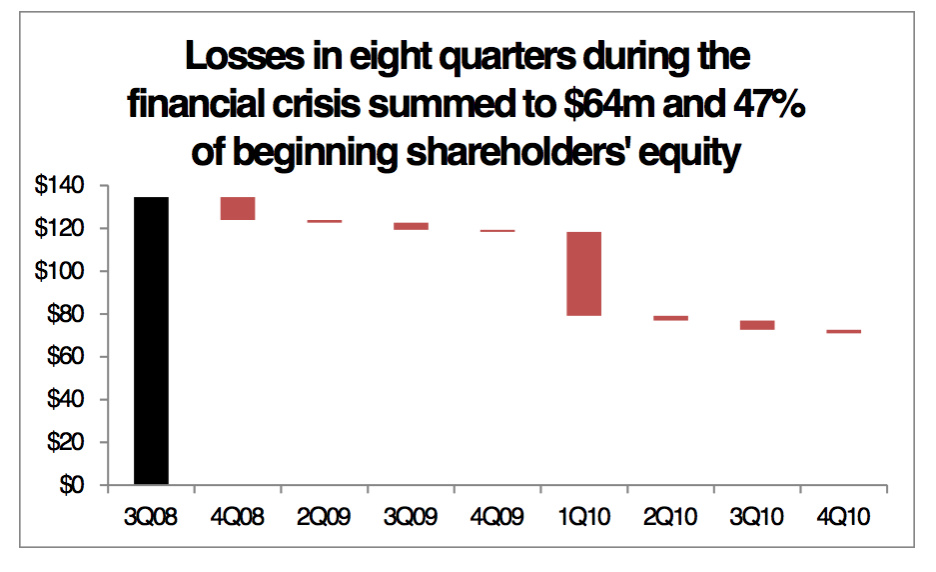 Below peer returns.  The bank’s return on assets (ROA) was lower than peers in 18 of the past 23 years.  During the period 1994-2016, the average for Ameris was 0.73%, compared with an average of 0.98% for banks in Georgia with greater than $100 million in assets (peers).  Higher returns are often attributable to lower cost of funding or higher contribution from low capital intensity fee businesses like wealth management or insurance brokerage.  Ameris is not favorably distinguished either way.

During 2009-10-11-12, Ameris recognized a total of $100 million of noninterest income called “gain on acquisitions.”  Income before taxes, in total, for those four years was $12 million.  And preferred stock dividends cost an additional $13 million.  So the ROAs from those years include gains that might not recur in the future. 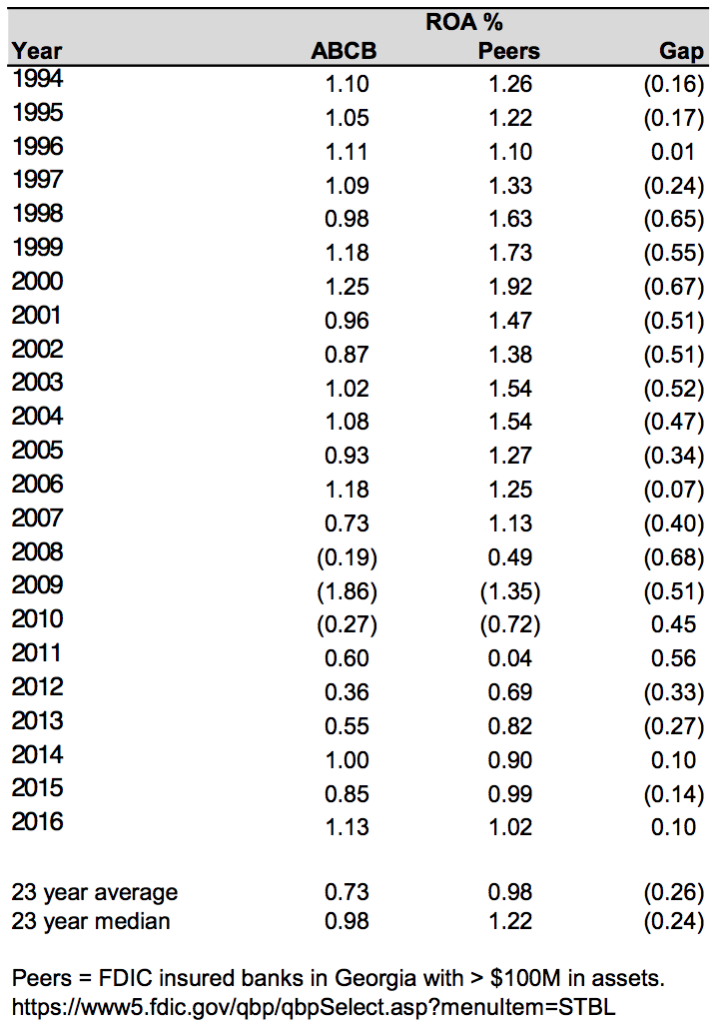 Weak deposit franchise.  The bank’s cost of deposits has been higher than peers in 21 of the past 21 years.  During the period 1996-2016, the average for Ameris was 2.37%, compared with an average of 2.07% for peers.  Banking is a commodity business with few sources of competitive advantage.  The cost of money to invest in loans and securities is by far the largest cost for a bank.  Typically, banks with low funding costs have cultivated relationships for 100 or more years.  In contrast, Ameris was founded in 1971. 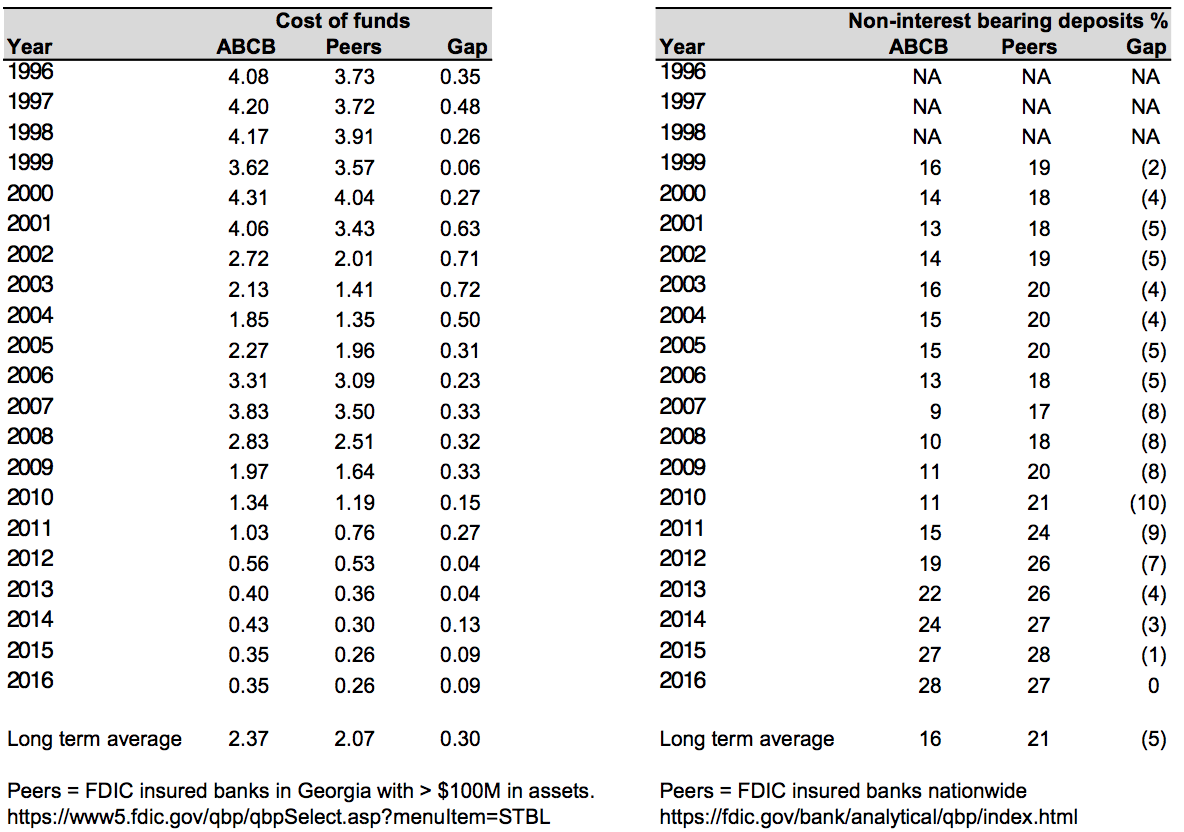 Small contribution from low capital intensity businesses.  A cross selling business model, like the one that Wells Fargo has carried to an extreme, usually benefits both the customer and the bank.  Many add on services that banks offer to customers, including investment advice or insurance brokerage, do not require capital.  The revenue from these businesses is typically reported as noninterest income.  Some banks have very high contributions from these fee businesses, and this contributes to higher returns on assets and equity. US Bancorp is an example.

Ameris does not have a diversified business with many fee services.  During most of the past 20 years, the ratio of noninterest income to assets was meaningfully below the ratio for all insured institutions, as depicted in the chart below.  Recently, Ameris expanded its mortgage banking activity, and the ratio has jumped to a level more in line with peers.  But since Ameris depends on mortgage activity, the bank’s fee contribution is less durable than a more diversified contribution. 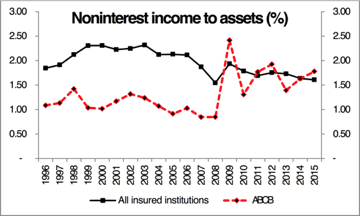 Heavy commercial real estate exposure.  Commercial real estate loans account for nearly 50% of the bank’s total loans.  These sorts of loans account for less than 20% of total bank credit.  Commercial mortgages are known as a transactional rather than a relationship oriented product.  The barriers to entry are smaller than other loan categories.  As a result, price often determines the provider, and there is competition from nonbank credit suppliers like insurance companies, real estate investment trusts, and from the capital markets (commercial mortgage backed securities).

Fast growth in new categories.  While commercial real estate loans are high at the bank today, they were even higher five years ago.  In 2010, this category accounted for nearly 75% of loans.  The bank has diversified.  But given that overall loan growth has been significant, growth in new loan categories has been extreme.  For example, commercial loans have increased from $171 million to $726 million in the past five years, a compound annual growth rate of 34%.

High growth in assets and earnings and shares.  To a casual observer, Ameris appears to be a fast grower.  The compound annual growth rates for assets, loans, shareholders’ equity, and net income over the past 27 years are 15-16%.  The bank’s growth rates are clearly superior to comparable growth rates for the banking system of 5% for assets and loans, and 11% for earnings.  An examination of the banking crises of the 1980s and early 1990s by the FDIC discusses the relationship between high rates of growth and bank failures. 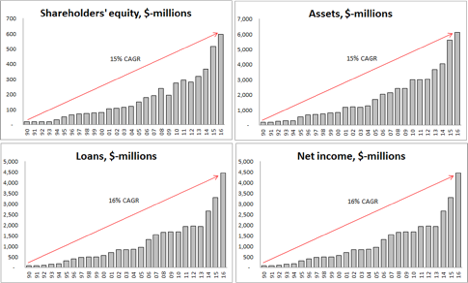 Per share growth is lower but decent.  The 8% growth rate in shares outstanding significantly reduces the growth of assets and earnings on a per share basis.  For the same 27 year period, the growth in assets and book value per share was 6%, and for earnings per share it was 7%. 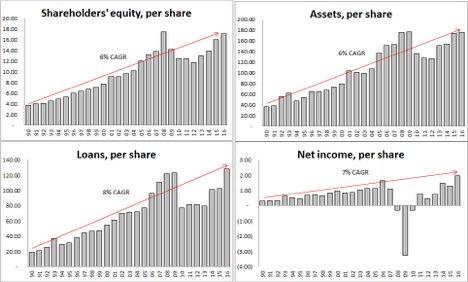 But growth was fueled by retaining 75% of earnings.  Per share growth rates of 6-7% in assets (earning capacity) and earnings seem pretty good.  But to achieve this growth, the bank retained 75% of earnings.  In other words, the conversion of earnings to free cash flow has been low.  Excluding loss making years, the payout ratio is even lower – just 20%.  The charts below show the ratio of cumulative retained earnings and cumulative dividends.

To recap, if things are as good as they ever have been for the banking industry and for Ameris Bancorp, then holders of the common stock can expect a 6% yield. And based on history, they can expect a 1.5% return in cash from the 25% payout ratio, and 6-7% growth.

Catalyst -- current earnings are not sustainable.  During the past several years, Ameris has benefited from various gains that many investors would not typically capitalize at a high multiple because the gains are not a durable or reliable source of future cash flow.

(1) The “Retail Mortgage Division” accounted for 21% of total pretax income in 3Q16 and 20% in 9M16.  Before 2012, the contribution was close to 1%.  The bulk of these earnings are from selling residential mortgages to other banks or housing government-sponsored enterprises like Fannie Mae.  According to the statement of cash flows, so far this year Ameris originated over $1 billion of residential mortgages and sold $983 million.  This netted gains of $42 million.  Not bad.  The gain on sale margin was 3.69% in the third quarter.  A significant portion of the bank’s origination volume is for refinancing.  Rising mortgage interest rates are likely to cause refinancing activity to fall and hence Ameris will originate and sell a smaller volume of loans.

(2) In 2009-10-11-12, gains on acquisitions accounted for a total of $100 million in pretax income. This compares with total reported income before tax of $12 million, which is before $13 million of preferred stock dividends. These acquisitions were great deals and may have prevented more significant problems for Ameris itself. But the gains are not recurring and should not be capitalized at a 20x multiplier.

(3) Credit expense is significantly below normal. The loan loss provision in the first nine months of 2016 equaled 0.07% of average loans. This is the lowest ratio in 27 years of readily available data for the bank. The median is 0.53% and the average is 0.80%. The max is 3.00%. Reverting to the median would cause a 20% reduction in reported LTM pretax income and reverting to the mean would cause a 35% reduction. Just this one change alone would increase the P/E from 23x to 30x and 36x. 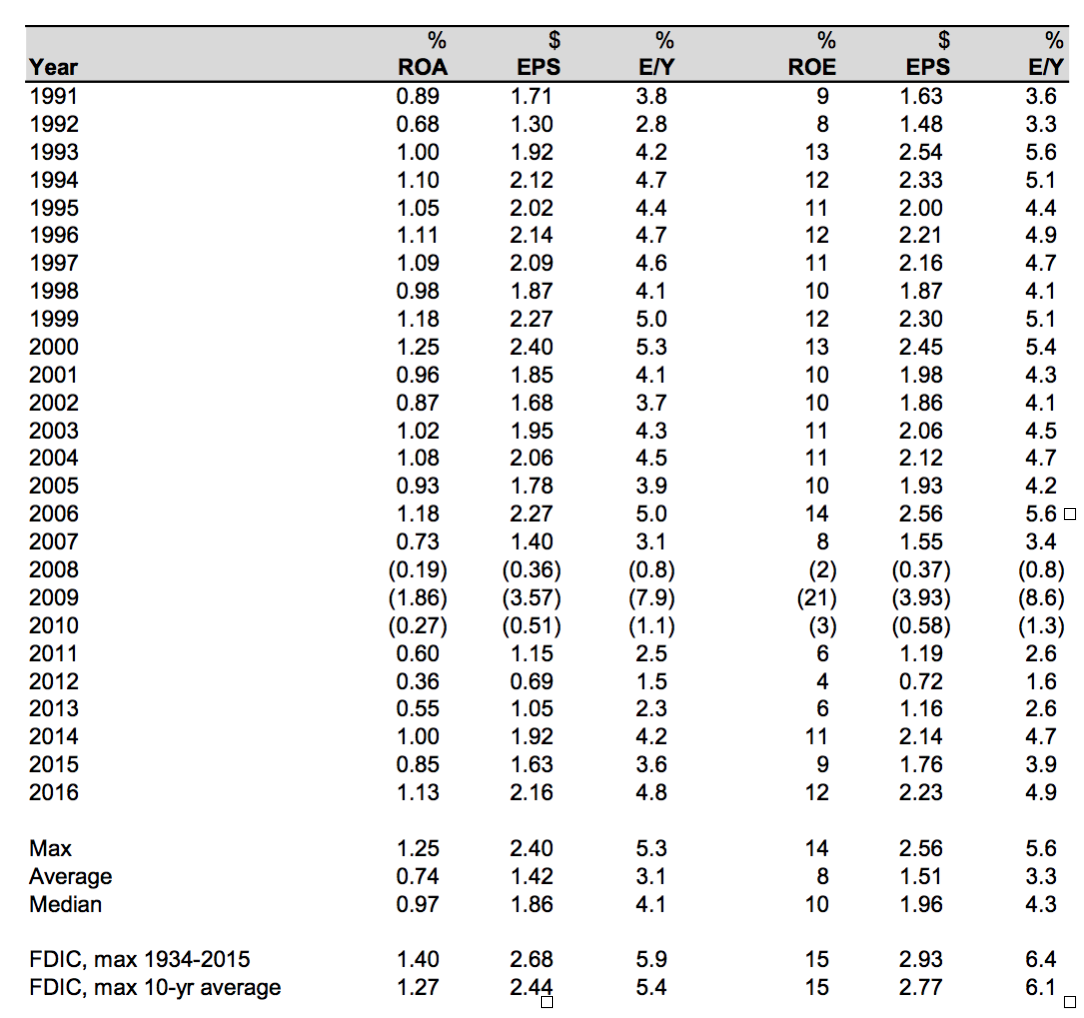 Mortgage banking has contributed 20% to earnings recently.  Lower mortgage originations will cause a decline in earnings.

Are you sure you want to close this position AMERIS BANCORP?

Are you sure you want to Flag this idea AMERIS BANCORP for removal?