At $59.15 and 10.6x guided 2017 EPS, investors are being given a tremendous entry point to own American Express (“AXP”), a franchise that, despite recent challenges, remains a beneficiary of long-term secular trends and has an intact and attractive EPS growth algorithm that can generate total returns (EPS growth + dividend yield) of ~13% over the medium-term.

In short, I believe that:

Also note that AXP was previously written up over a year ago by Mustang @ $80/sh: https://www.valueinvestorsclub.com/idea/American_Express_/136700

Given that everyone is likely familiar with the basics, I’ll keep this relatively brief. For more information I recommend reviewing the presentation from the March 2016 Investor Day: http://ir.americanexpress.com/Cache/1001208107.PDF

AXP operates a closed-loop payment network – what this means is that they manage the transaction from end-to-end, from negotiating with merchants to have them accept AXP cards to processing the payment to issuing the cards to end customers. V & MA focus on the first two elements and do not issue cards while COF & SYF focus on the last element and DFS operates their own closed-loop network. Historically, operating a closed-loop network has given AXP access to better information than open-loop competitors which they see as a competitive advantage.

The other way in which AXP is different is a focus on charge cards rather than credit products (although they have those too) – these require balances to be paid off each month and attract a more affluent customer base. As a result, the primary driver of revenue and profitability is purchase volume rather than outstanding loan balances. 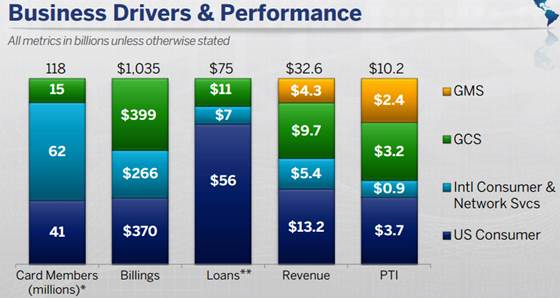 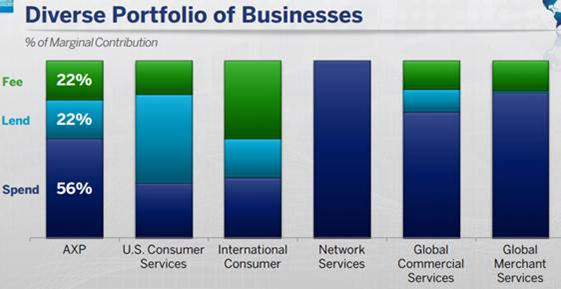 1. AXP is trading at a tremendously cheap valuation

On basically any metric you can think of, AXP is trading tremendously cheap, including: 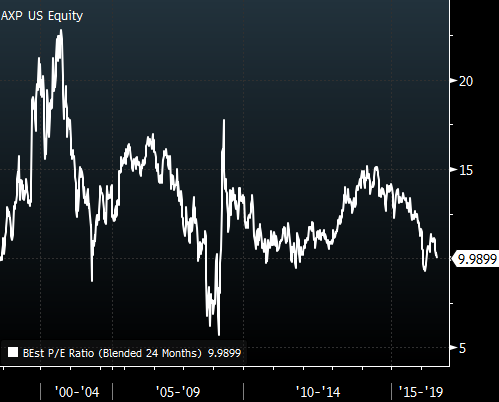 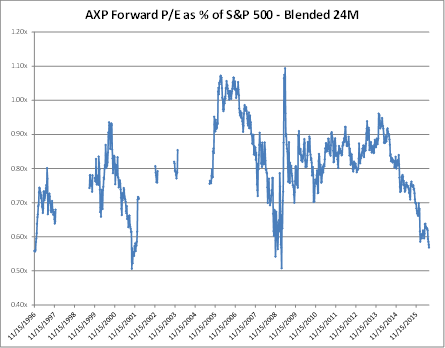 C)      Relative to card-issuing comps (COF, DFS, SYF) – trades at lower than normal premiums despite being the least-cyclical of the companies toward the tail-end of an economic expansion

2. The market’s focus on the loss of the Costco co-branding relationship is unwarranted – this is already in forward estimates and then some

The big story over the last year or two, and the primary reason for weak revenue growth and EPS growth in 2016 and 2017 is the loss of the Costco branded card relationship. While this had been a long-term (16 year) relationship, the two companies could not come to terms due primarily to a much more competitive environment for co-brand partners. Furthermore, Costco had recently undergone a management change. While the prior CEO had seen the relationship as a strategic one, the new CEO saw AXP as a service provider, and using this lens did not place much value on the other positive attributes that AXP brought to the table (brand association, high customer service orientation, value from T&E). The business instead went to Citi/Visa which was the low bidder.

Costco was certainly material to AXP’s operations and the loss has weighed on the stock price and operating results:

The Costco business transitioned in June 2016 (as an aside, the transition has been very messy for Costco/Citi and they have been perceived as having “botched” it – highlighting the risk to switching cobrand relationships for other partners: http://www.bloomberg.com/news/articles/2016-06-23/costco-citi-deluged-by-complaints-in-rocky-credit-card-rollout). As a result, it is making 2016 and 2017 y/y comparisons look poor and hiding what is in actuality very good ex-Costco performance:

3. Underperformance over the last month due to SYF weakness is a significant overreaction

As of early June, AXP appeared to be beginning to recover some of the underperformance associated with the Costco transition and broader economic concerns. However, on June 14th, SYF (a card-issuing peer) disclosed weakening trends in their loan portfolio, projecting +20-30bps in incremental charge-offs over the coming 12 months. The result was a bloodbath for the card issuers:

While AXP’s reaction post-6/13 was more muted than SYF & COFs, I believe AXP has had the most extreme reaction out of all the issuers above for a few reasons:

4. Recent growth is depressed due to FX and low oil prices; however AXP remains a beneficiary of long-term secular trends in payment growth

In addition to the loss of the Costco relationship, recent growth has been depressed by both FX and low oil prices. FX has been a ~3-4% headwind for the last year and has driven billed business growth of only ~2% vs. ~6% on a constant currency basis. Furthermore, the impact of low oil prices (on lower gasoline purchases & cheaper airline tickets) impacted billed business by ~1%. 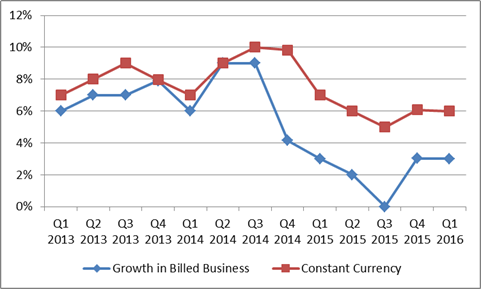 However, looking through these items, AXP has been, and will continue to be, a beneficiary of long-term secular trends in payment growth – 10-year growth in billed business has been impressive and very consistent, with barely a blip in FY2009:

Given the noise in earnings around the Costco loss, the cleanest way to look at AXP is in terms of their steady-state EPS growth algorithm as if they had never lost the Costco business – this provides a reasonable estimate of where AXP can grow off of the clean 2017 guided EPS of >=$5.60.

In short, I believe that given current trends in the business that there is still visibility to 11.1% steady-state EPS growth – adding in a 2.0% dividend yields gets us to a 13.1% total return algorithm which seems attractive, particularly given where the rest of the market lies. 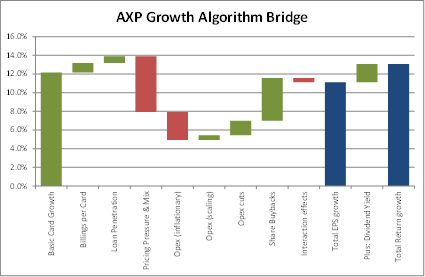 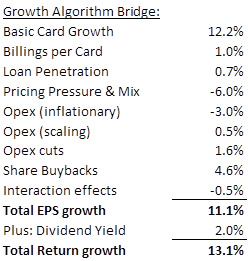 Note that most of this growth comes straight from card growth (estimated at 5.5%, contributing 12% to EPS growth) – however, because GNS cards (relatively low revenue because AXP isn’t the card issuer) have been growing at a faster rate, a lot of this growth is lost (represented in the “pricing pressure & mix” category).

Note also that this growth algorithm only reflects a 1% reduction in non-marketing/rewards opex from cost cuts (i.e. expense items are assumed to grow at 1% instead of 2% inflation) while mgmt has talked up a much larger cost cut plan of $1B over the next two years (7% of addressable spend) – therefore there is near-term upside to this growth algorithm. There is also near-term upside from additional share buybacks – I only assume 4.6% of shares are purchased each year (consistent with a “sustainable” level after allocating some net income to paying dividends and supporting growth), but the recent CCAR results allow AXP to buyback 6% of shares over the next year (which mgmt has indicated they will do). 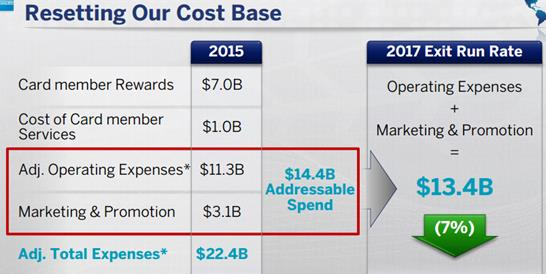 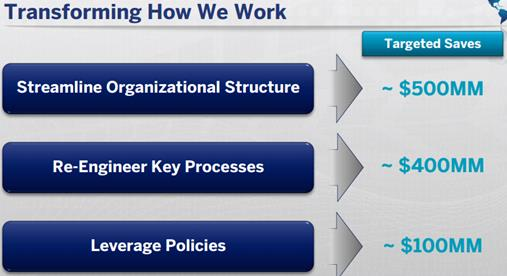 6. Sell-side is at near-record bearishness – upgrades will occur as AXP passes near-term issues

My general sense from reading the sell-side coverage is that a lot of the underweight/hold analysts are starting to get incrementally more bullish on the name – a lot of the risks/headwinds they are using to justify the rating are well-understood and the stock is arguably discounting them in. I think the potential for a prolonged upgrade cycle over the next year is significant given that we are now at near-record levels of bearishness (surpassed only by levels in late 2008/early 2009): 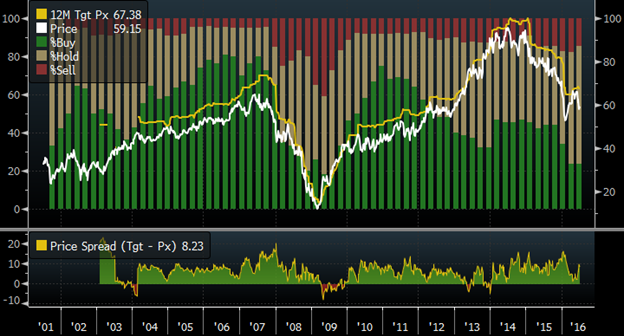 In particular, recent downgrades have been uninspiring and have focused on a bunch of issues which are very well understood and easily refutable/debatable IMO.

7. AXP has a history of compounding EPS through the cycle – they are better situated than more lending-focused and lower-tier focused peers

As discussed earlier, AXP is a structurally better business than other issuing banks (COF, DFS, SYF) because they focus on lower-risk customers (higher income, better FICO, etc.) and on lower-risk products (charge card vs. consumer credit). This is of particular importance going into the tail end of an economic expansion. While other issuers often see dramatic declines in earnings in recessionary periods that take years to recover from, AXP has historically bounced back relatively quickly from recessions. Through the last two cycles, AXP has compounded EPS at ~8% and EPS + Divs at ~10% which mitigates the risk of mistiming the credit cycle (especially in comparison to the other issuers). 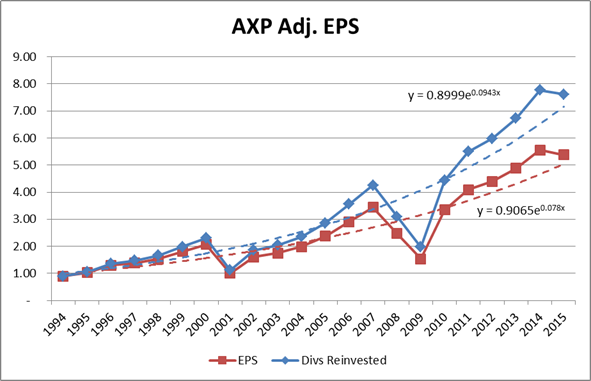 8. AXP has an aligned management with a history of shareholder-friendly capital allocation

Finally, I think management has done a good job historically on the capital allocation front. They appear to have grown in a disciplined manner and have chosen to return the majority of cash flow to shareholders through dividends (~20% of net income over last 10 years) and share repurchases (~50% of net income over last 10 years). Shares outstanding have declined considerably in the last few years and are currently getting bought back at a ~6% rate: 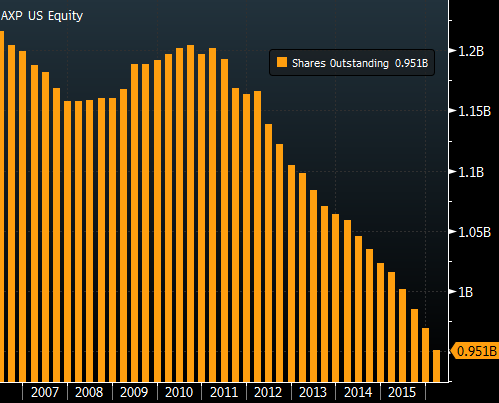 The management team also owns a meaningful stake in the company, creating some alignment w/ shareholders:

I believe that the market is offering investors a very unique opportunity to invest in AXP at a reasonable multiple. I believe the growth algorithm of the company is sustainable and allows them to generate total shareholder returns (EPS growth + divs) of 13%+ over the medium-term. At 14-15x 2017E (ignoring potential upside to those numbers, mgmt guidance is for $5.60+), fair value for AXP would be $78-84/sh, 32-42% above current levels. I think most of the “chunky” risks have disappeared post-Costco given that Delta was recently renewed. Competition will continue to pressure earnings, but not to any degree larger than they have in the past few years and in any case it does not meaningfully impair the growth algorithm. A recession would cause AXP to de-rate (as would the entire market) but this time around they would be entering a recession pretty clean (credit quality is much better than pre-GFC with very low write-offs and delinquencies, and loan portfolio is smaller post-Costco divestiture) and operating results have historically rebounded following recessions and gotten back to trend.

Are you sure you want to close this position AMERICAN EXPRESS CO?

Are you sure you want to Flag this idea AMERICAN EXPRESS CO for removal?